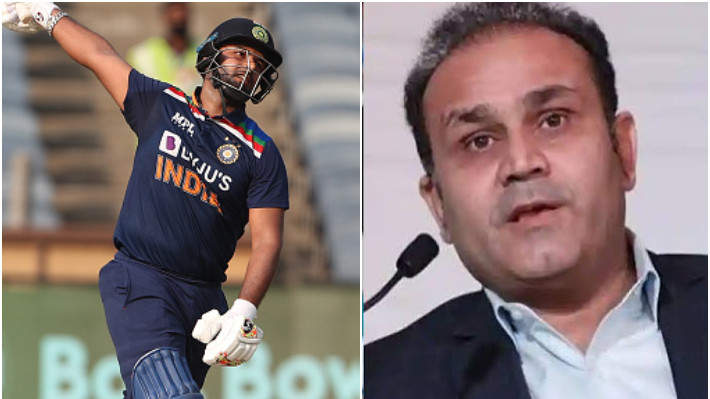 Rishabh Pant reminds me of my early days: Virender Sehwag

Virender Sehwag stated that in both ODIs and T20Is, Pant should learn to bat till the end of the innings.

Rishabh Pant is garnering praises from all quarters after his incredible performance in the ODI series against England. The dashing left-hander scored 155 runs in the two ODIs that be played, and scored his runs at an average of 77.50, and at a stunning strike rate of 151.96.

And now, former Indian batting legend Virender Sehwag has showered praise on Pant. Sehwag stated that the biggest positive to come out of the series against England for the Indian side was the form of Rishabh Pant. Adding that Pant uses the second powerplay perfectly, Sehwag was of the opinion that it is important for a player like Pant to stay in the side because of the positive mindset that he has.

Sehwag even said that Pant reminded him of his own batting exploits during his playing days, and added that Pant does not think about what others people will think about him.

“The biggest positive that has come out of the series is Rishabh Pant. Because when he comes to bat in the middle overs in the ODIs, and the 2nd powerplay comes up, he uses it perfectly. I feel it is important for him to stay in this team, he has quite a positive mindset. He reminds me of my early days. He doesn’t think much what others are saying, he just goes out to bat,” said Sehwag in a chat with Cricbuzz.

“Rishabh Pant could be the next superstar in white-ball cricket,” says Virender Sehwag

Virender Sehwag further added that if Rishabh Pant converts his starts into big scores, he can even emerge as the next superstar of India. Adding that a batsman can sometimes encounter a pitch that is slow and where shot-making would not be easy, Sehwag opined that Pant should also know how to get out of such situations as well.

The ‘Nawab of Najafgarh’ also said that Pant might have changed something with respect to his batting, and that was the reason he was able to score runs. Sehwag concluded by stating that in both ODIs and T20Is, Pant should learn to bat till the end of the innings.

“But only if he learns how to bat for full 50 overs, and bats till the end, and learns to convert the 70s-80s into 100s, he could be the next superstar for India. The wicket was very good, the ground was short. Sometimes, you will get slow wickets, and you will not be able to hit your shots. How he gets out of those situations is very important to know, so he must know that. In the IPL, when he was not able to score runs, he must have changed something which was why he was able to score runs in Tests. But in ODIs, and in T20Is, if he learns to bat till the end, and make the most of his abilities, then he can be the next superstar in white-ball cricket,” concluded Sehwag.