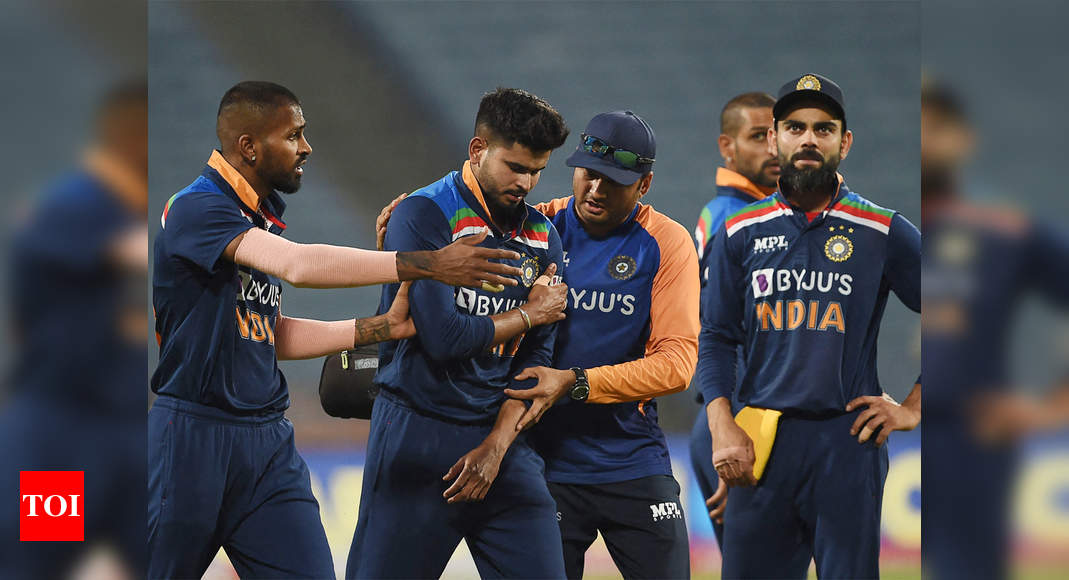 He is likely to be out of action for a few months, with surgery scheduled on his left shoulder Shreyas Iyer is set to miss out on the whole of IPL 2021

In a setback to both the player and the Delhi Capitals, Shreyas Iyer is set to miss the entire IPL 2021. ESPNcricinfo understands that Iyer, who is the Capitals captain, will undergo surgery to his left shoulder, which he partially dislocated on Monday while fielding during first ODI of the England series.

It is understood that Iyer is likely to be out of cricket for at least a few months, thus erasing any hopes the Capitals had of him returning during the second half of IPL 2021, which will be played in India between April 9 and May 30.

On Thursday, the BCCI had only confirmed Iyer had been ruled out of the ongoing three-match ODI series against England without releasing any details on the injury, as well as the surgery. It also wished Iyer "speedy recovery" as response to a tweet by the Indian batsman, who said he would be "back soon."

I’ve been reading your messages and have been overwhelmed by all the outpouring of love and support. Thank you from the bottom of my heart to everyone. You know what they say, the greater the setback, the stronger the comeback. I shall be back soon ❤️? pic.twitter.com/RjZTBAnTMX

Iyer picked the injury during the early part of the England's chase in the first ODI. Posted at extra cover, Iyer fell awkwardly on his left shoulder while successfully intercepting a drive from Johnny Bairstow in the eighth over of the England innings. Immediately, Iyer was seen grimacing and rolling on the turf while holding his left shoulder. After brief medical attention, Iyer was rushed out for scans, which revealed he had "sublaxtion" (partially dislocated) in his shoulder.

It was the third time since IPL 2020 that Iyer had hurt the left shoulder, having also hurt it during the ODI series in Australia.

Indications that Iyer's injury this time was serious, came via a tweet posted early on Thursday by Parth Jindal, the Capitals' co-owner. Jindal said he was "devastated and gutted", and wished Iyer "quick recovery" as India "needs you in the T20 World Cup."

Absolutely devastated and gutted for our skipper @ShreyasIyer15 - stay strong captain - hope for a very quick recovery. Have full faith that you will come back even stronger from this. India needs you in the T20 World Cup. @DelhiCapitals @BCCI

Iyer had been appointed captain of the Delhi Daredevils, as they were called then, during IPL 2018. The team had won only one of their first six matches that year, which made Gautam Gambhir, then the captain, step down. Iyer, who was then 23 years old, was identified as his successor, three years after the franchise had bought him as an uncapped player.

Iyer had pipped local boy Rishabh Pant to the leadership position. He soon built a close rapport with the Capitals' head coach Ricky Ponting, as the team's fortunes turned around with playoff qualifications in the last two seasons. In 2019, the Capitals lost in the Eliminator, and in IPL 2020, they reached the final, losing to Mumbai Indians. Iyer was the fourth-highest run-getter in IPL 2020