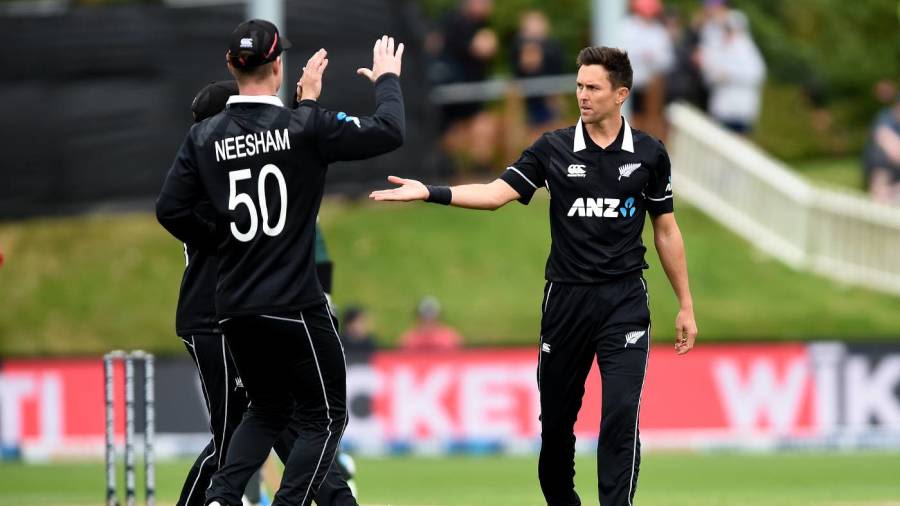 Trent Boult was relentless in his opening spell

New Zealand laid down an impressive marker on their return to ODI cricket for the first time in a year with a thumping victory over a disappointing Bangladesh. Trent Boult top and tailed the wicket-taking as the visitors' batting was overwhelmed on a surface offering bounce then Martin Guptill briefly peppered the grass banks as the target was hunted down with more than 28 overs overs to spare.

Only Madmudullah and Mushfiqur Rahim passed 20 for Bangladesh as the line-up was challenged by the University Oval surface which was exploited perfectly by New Zealand after they bowled first. In a sign of the hold they had with the ball, there were only eight boundaries (along with three sixes) as they bundled the opposition out with eight overs remaining when Boult claimed the last two wickets in three balls. Jimmy Neesham and Mitchell Santner claimed a tidy brace each.

Guptill picked up his T20 form from the series against Australia, sending seven of his 19 deliveries to the boundary, including four for six, in an opening stand of 54 in 5.3 overs. His fun was ended when he had a huge swing at Taskin Ahmed, who bowled with good pace, and edged behind although Guptill wasn't sure and used up a review.

With no scoreboard pressure Henry Nicholls and Devon Conway, the latter of three New Zealand debutants, went along at a leisurely pace. Conway departed with a handful of runs needed, picking out deep square leg, but it allowed fellow debutant Will Young a brief stay at the crease and his consecutive boundaries wrapped up victory, leaving Nicholls one short of his fifty.

This was New Zealand's first ODI since their aborted tour of Australia last March and just their fourth since the 2019 World Cup final. For the first time since 2012 they handed out three new caps in the same game with allrounder Daryl Mitchell joining Conway and Young. Mitchell wasn't needed with bat or ball and his one chance to get on the scoreboard was spurned when he was distracted by Tom Latham diving across him as Matt Henry found the edge of Liton Das in the sixth over. It was New Zealand's only error of the innings.

The opening scoring shot of the game was a six as Tamim Iqbal upper cut Boult over backward point, but the contest was soon won by the left-armer with a classic set-up: after twice beating Iqbal with late away swing he made one hold its line which thundered into Iqbal's pads to earn the lbw. Three balls later and Boult had his second when Soumya Sarkar played a poor stroke against a shorter delivery, popping a catch into the off side.

Das shaped up well in challenging conditions as he tried to commit either fully forward or fully back, but his hard work was undone when he got a leading edge to mid-on in Neesham's opening over.

The scoring rate rarely got above three an over against a relentless New Zealand attack. Kyle Jamieson, who struggled in the T20I series against Australia, went wicketless but at times Bangladesh could barely lay a bat on him as he gained troublesome bounce from a reasonably full length.

Rahim played solidly to try and give his team some chance of building a foundation but became Neesham's second wicket when he was cramped for room playing a cut and found gully. That was the first of three wickets to fall for nine runs in six overs.

Bangladesh's woes were compounded when Mohammad Mithun was run out backing up after a firm straight drive from Mahmudullah flicked the finger of Neesham into the non-striker's stumps. Mehidy Hasan then moved too far across his crease against Santner and had his leg stump tickled.

Debutant Mahedi Hasan marked the occasion when his first scoring stroke in ODIs was a huge 94-metre six over long-off but an attempt to repeat it four overs later offered a catch to mid-on leaving Bangladesh seven down with 18 overs remaining.

Madmudullah and Ahmed formed a 10-over stand although large parts of it was purely survival before Madmudullah, attempting to inject some impetus, picked out midwicket where Santner timed his leap perfectly. Boult did the rest.