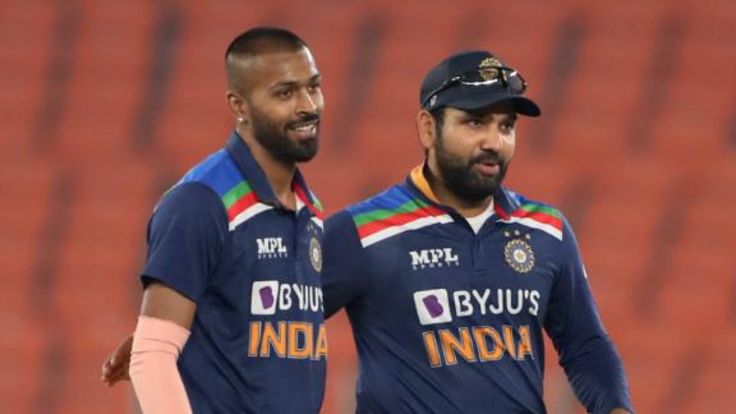 Thakur picked up three wickets; Pandya and Chahar chipped in with two each

Suryakumar Yadav, Krunal Pandya and Prasidh Krishna earned their maiden call up to the Indian ODI side on Friday.

England. India could have three potential debutants in the series with Suryakumar Yadav, Prasidh Krishna and Krunal Pandya getting their maiden call-up to the Indian ODI side. 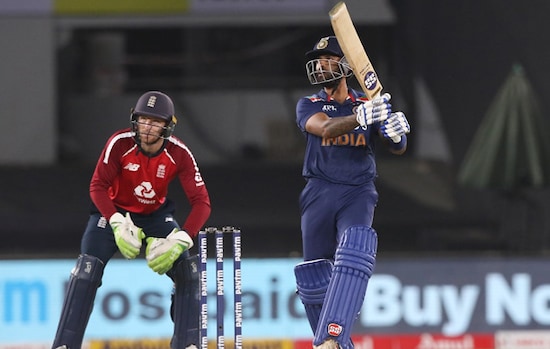 India broke the trend of win toss-bat second-win game, squeezing out a thrilling eight-run win in the fourth T20I against England on Thursday after being asked to bat first. The two teams will now head into the final game with the series 2-2.

There was high drama, great skill on display with bat and ball, and a spot of umpiring controversy in a match that packed plentiful action in 20 overs across both innings. In his first time batting for India, Suryakumar Yadav made a splash few will forget, top-scoring with a rollicking 57 off 31 that turbo-charged India's start. His innings and his dismissal will vie for headline space with each other though. Yadav was rattling along at more than 11 runs per over when he top-edged a sweep to deep backward square leg, where Dawid Malan got to the ball even as it was dipping down. Numerous replays later, Yadav was adjudged out, with the third umpire ruling that there wasn't enough evidence to overturn the on-field soft signal of 'out'.

Yadav's departure in the 14th over left the game delicately poised, but Shreyas Iyer launched into perhaps his best T20I innings yet, with a sparkling 37 off 18 that gave India a total that was above par, even though this was the best batting pitch of the series and there was dew around.

England's reply progressed in fits and starts, Jason Roy shrugging off a slow start to lay into the bowling and then Ben Stokes unleashing his power at the back end, but India's bowlers showed excellent control with a ball that was getting wetter, sticking to their lengths and varying their pace. England's chase looked in control when Stokes was blazing away, but a double-wicket over from Shardul Thakur sent back Stokes and Eoin Morgan, swinging the momentum decisively India's way.

Suryakumar Yadav begins with a bang

He had waited for a long time to make his debut for India. He waited some more before he got to actually bat. And when he did, he ensured his first time batting for India wouldn't be forgotten. With Jofra Archer - one of England's two thunderbolt deliverers - pounding in a 144 kph back-of-length ball at his ribs, Yadav coolly moved inside the line, and hoicked a pull shot over fine leg, front leg in the air by the time he had pirouetted. As statements of intent go, it was tough to top that one.

Yadav continued with the same intent, if not at the same strike rate, but his bustle meant India had an ingredient that had been missing in their two defeats batting first in the series: a non-sputtering scoreboard up top. Yadav was imperious while driving, expertly skilful in manipulating the field when scoring runs behind the wicket, and nerveless in his shot-making. If there were any butterflies about batting in an India shirt for the first time, they were well hidden.

Sam Curran was brought on for his first over in the 14th of the innings, and his first ball was swept disdainfully over fine leg. Yadav attempted to repeat that shot next ball, but only got a top edge. Malan ran forward and grabbed the ball very low while still going forward, with palms facing down. The decision was referred to the third umpire, with the soft signal on-field being 'out'. Replays seemed to suggest the ball had touched the turf with Malan not having any fingers underneath it, but third umpire Virender Sharma ruled that there wasn't enough conclusive evidence to overturn the soft signal, and Yadav had to go. 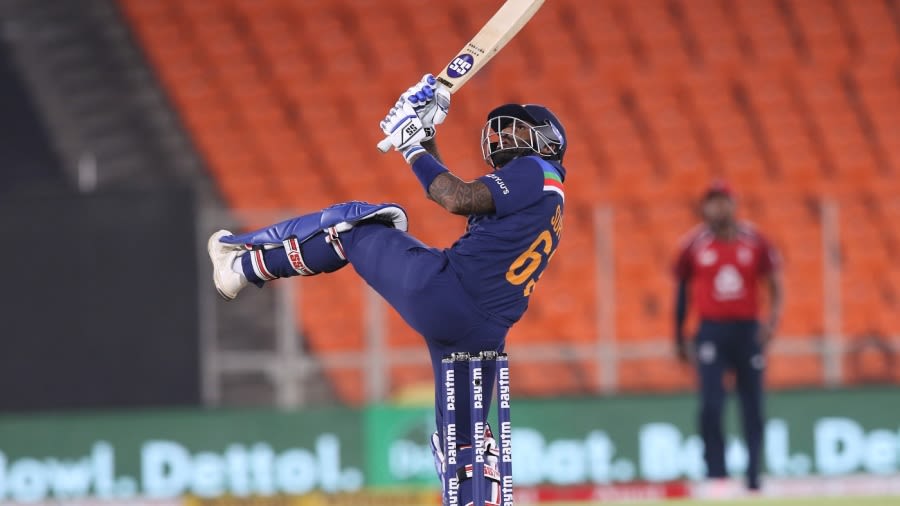 Suryakumar Yadav hits his first ball in international cricket for a six BCCI It could have derailed India's innings, but Iyer came out and peppered the square and straight boundaries with elan, not only ensuring the run-rate or morale didn't flag but also keeping India on course for a winning total. The surge at the death was reined in slightly towards the end, as Archer finished with T20I-best figures of 4 for 33, while Mark Wood was menacingly impressive once again in his 1 for 25.

Virat Kohli gambled by throwing Hardik Pandya the new ball, and Pandya responded by bowling two overs in the powerplay while giving up only five runs.

Jason Roy took nine balls to get off the mark, and at the other end, Bhuvneshwar Kumar removed Jos Buttler in the third over. Roy got a couple of streaky boundaries away before breaking free when Washington Sundar came on. What India's bowlers did well though, was in not letting England string together a sequence of heavy-duty overs. When England looked like stepping on it, the bowlers reined them back in. Pandya bowled his third and fourth overs well spaced out, one in the middle and one at the death, but each time his changes of pace foxed batsmen. He ended with 2 for 16 in four overs, in a game where the average run-rate was over nine. What England might have thought of as the bowler they could target, turned into one who had the most economical figures in the match.

England's depth meant they were still not out of it, even when the asking rate ballooned to almost 12 an over, with the team 79 for 3 in 11 overs. Stokes, who hadn't quite hit his batting stride so far in the series, started less than fluently, but a mow down the ground that went at light speed off Sundar at the start of the 12th over kicked him into high gear. Stokes began to find his timing and his range, while Jonny Bairstow was doing the same after an indifferent start. Even after Bairstow fell to Rahul Chahar - given an opportunity instead of Yuzvendra Chahal in this game - Stokes didn't slow down.

With England needing 46 from the last four, and Stokes having Eoin Morgan alongside, the visiting side were favourites. Thakur changed that within two balls, having both men caught mis-hitting slower balls. Thakur, who had shown an excellent repertoire of slower balls in the third T20I too, brought his variety into play once again and was difficult to line up. Once England had lost both Stokes and Morgan, India didn't let the advantage slip.