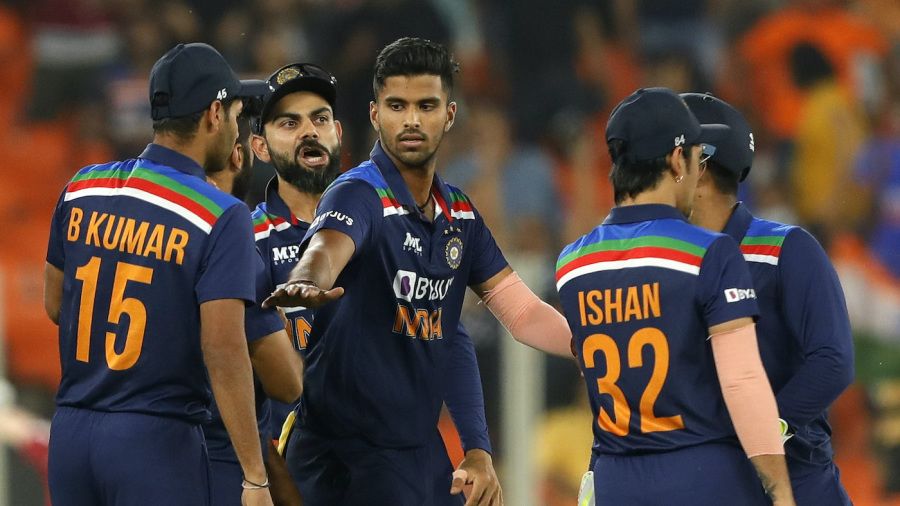 Washington Sundar can bowl to right-handers too

In a time when T20 is all about match-ups, there's sometimes a danger that teams can use bowlers in a formulaic way. Offspinner to left-hand batsman, left-arm orthodox to right-hander.

In the first match of India's T20I series against England, Virat Kohli held Washington Sundar back until the 12th over of England's chase, and he struck immediately to pin Jason Roy lbw, but the game was already up by then. Axar Patel had taken the new ball against the right-handed pair of Roy and Jos Buttler, while Sundar was reserved for England's left-hander-heavy middle order.

Having slipped to a heavy defeat in that game, India put all their eggs in one basket and picked just five bowlers, including the allrounder Hardik Pandya, for the second.

Sundar got to bowl in the powerplay role he so relishes, but it was in the middle overs that he made a stronger impression, and he did so by taking out two of the most dangerous right-hand batsmen going around in T20, Roy and Jonny Bairstow. Those two strikes set the scene for a slower-ball masterclass at the death from Shardul Thakur and Bhuvneshwar Kumar, as India went on to level the series with a seven-wicket win.

The evening, though, didn't begin well for Sundar. He prides himself on hitting an awkward, in-between length, and threatening the stumps with the new ball, but on Sunday he marginally missed his length and watched Roy plant his front foot and clout him over long-on for a first-ball six. Sundar immediately began hitting the pitch harder and dragged his length back to give up just a single off the next five balls of the over.

In his next over, Sundar applied greater pressure and made Dawid Malan manufacture shots. Malan took a little trip down the pitch, but Sundar dug one right into it, hitting that in-between length and drawing an inside edge to the leg side. Malan then searched for one of his go-to shots - the slog-sweep - but then Sundar doesn't offer you the length or time for that shot. He speared a non-turning offbreak into Malan's pads from round the stumps at 103kph, with that sharp angle pushing the ball past leg stump.

All of his six balls in Sundar's second over were over 100kph, cramping the batsmen for length or room. Dinesh Karthik, Sundar's captain at Tamil Nadu, speaking to Sky Sports reckoned that the spinner "looked like the fastest Indian bowler on display" on an evening where Thakur, Hardik Pandya, and Kumar all regularly took pace off the ball.

When Sundar returned for his second spell, he didn't have a left-hander to work with. Instead, he was up against Roy and Bairstow, who has been shifted down to the middle order to thrash any variety of spin. England were well-placed at 91 for 2 in 11 overs before Sundar slowed it up to 95.8kph and dared Roy to clear the longer square boundary on the leg side. The opener couldn't get underneath it and holed out to deep square leg. 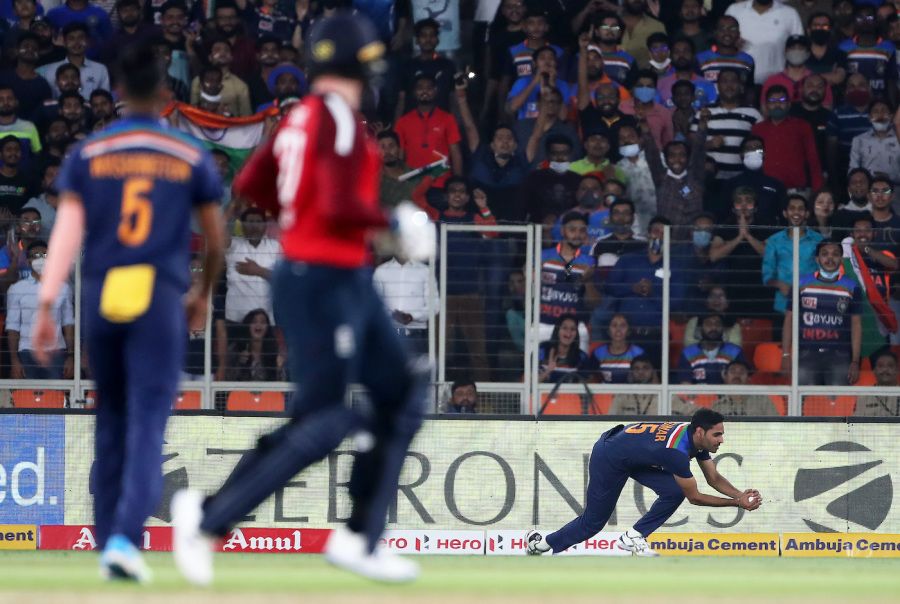 Then, in his next over, Sundar slowed it up further to 85.6kph, shifted his line wider, and found extra bounce from a length to have Bairstow skying a slog-sweep to Suryakumar Yadav at deep square leg. Eoin Morgan's England are pretty big on match-ups, so they probably felt that their right-handers could go after Sundar, but the spinner had bested them.

Sundar is a fairly traditional offspinner without a variation that goes the other way, but his T20 smarts allow him to hold his own even without a ball that turns away from the right-hander.

"Definitely, the mindset [while bowling to a right-hander] differs for me," Sundar had told ESPNcricinfo in 2019. "And it varies from batsman to batsman as well. One might be strong on the off side and the other maybe strong on the leg side. Especially at this international level, there's no margin for error and it's important to do your homework. You need to be really precise with the lengths and lines you want to bowl."

On Sunday, Sundar's middle-overs besting of two big-hitting right-handers from the No. 1-ranked T20I team made a big impression on his captain.

"Special mention to Washi," Kohli said at the post-match presentation. "He bowled to only one left-hander in the middle, and to all right-handers, used the big boundary really well, changed pace."

The series had begun with Kohli saying there was no room in India's T20 plans for R Ashwin as long as Sundar was bowling well. He didn't have much of a role to play in the series opener, but handed extra responsibility in the second game as one of only five bowlers, he rose to the occasion, in both the Powerplay and the middle overs.