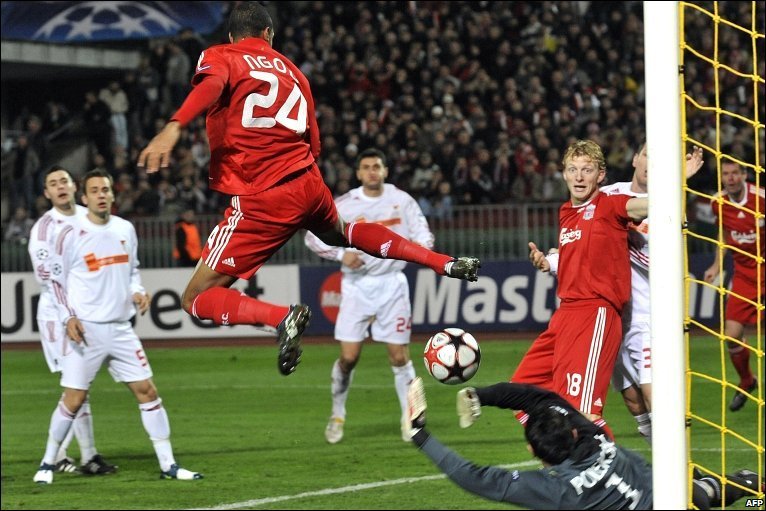 (CNN)-In recent years AC Milan has been something of a sleeping giant in European football, but that could be about to change.

The seven-time European Cup winner last played in the Champions League during the 2013-2014 season, but on Thursday in a 1-1 draw with Manchester United in a first-leg last-16 Europa League tie, Milan provided further evidence that its a team to be reckoned with.

Second in Serie A, but looking well placed to play in the Champions League next season, AC Milan left it late to secure the draw -- defender Simon Kjær scored a dramatic late equalizer in stoppage time to stun United -- but the Rossoneri fully deserved to pull level.

Milan manager Stefano Pioli, who has helped bring back some of the fear factor that used to surround Milan during the club's heyday, called Thursday's game "a great performance and a great result."

"We are working to grow and bring Milan back where we belong," he told the media. "These are the best games in that sense so I was happy to face a team like United. 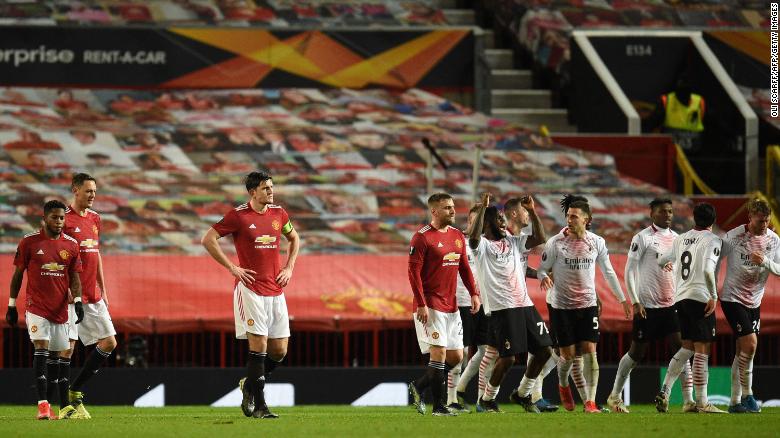 "I keep repeating to my players that I'm not coaching a normal group. This an extraordinary group, the lads always give their 100% in every game, they are just incredible.

"Before the game we would have been very happy with a 1-1 draw. Tonight we know that we could have earned even more after this performance.

"The spirit of this team is simply amazing. We want to take control of every game, we are working hard to do so.

"The way we want to play needs a great commitment by everyone in the team and despite playing so often, the lads never relax a bit. I cannot say enough to praise them."

Kjær sent a bullet header over goalkeeper Dean Henderson in the 92nd minute to level the game at 1-1 with the second leg in Milan coming next week.

A controversial video assistant referee review for an apparent handball denied Franck Kessie what would've been a sublime opener and Milan looked more comfortable despite the youth of the side -- talisman Zlatan Ibrahimović was missing through injury.

However, it was the hosts who broke the deadlock against the run of play, and it came from a bit of magic from a substitute.

The 18-year-old Amad Diallo, who had only come on five minutes beforehand, produced a wonderful backwards header from a pinpoint Bruno Fernandes pass to float the ball over Milan goalkeeper Gianluigi Donnarumma.

In scoring with his first ever shot for the club, Diallo became the youngest non-British player to ever score in major European competition for Manchester United.

But Milan didn't give up easily, dominating the possession from there on in and Kjær's goal gives Milan an all-important away goal. 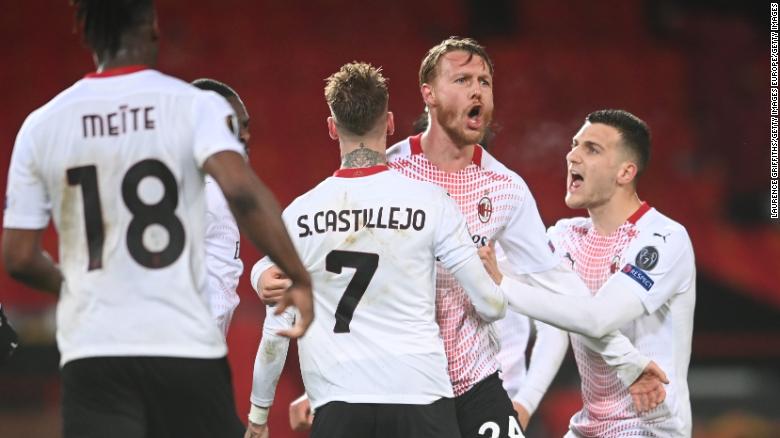 The Real Madrid loanee picked up the ball around 25 yards from the Olympiacos goal, turned, and unleashed a "venomous" strike which powered past the despairing Jose Sa in goal.

Although the Greek hosts equalized in the second half, two late goals from Gabriel and Mohamed Elneny gave Arsenal a commanding 3-1 lead, with the second leg to come in London on March 18. 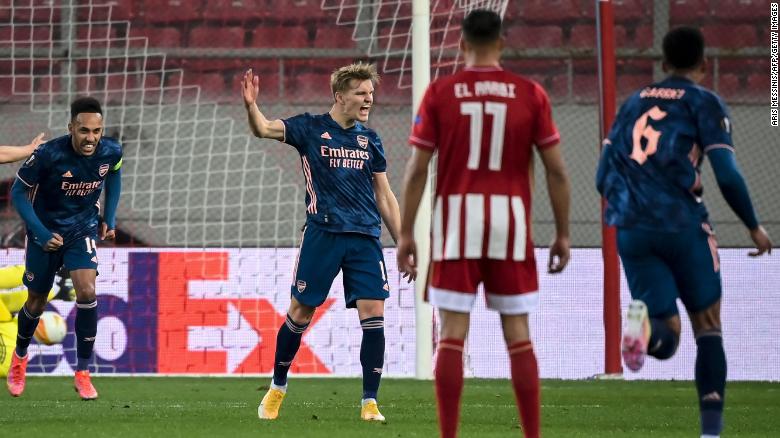 Odegaard celebrates after scoring his team's first goal against Olympiacos.

For the Norwegian midfielder, who is on loan from the Spanish giants until the end of the season, his first goal for Arsenal was a "big moment" because he admits he "feels at home here."

"It was a great moment," Odegaard told Arsenal.com. "I was eager to get on the scoresheet and I didn't get any goals yet, so it was a good moment for me and also a crucial moment in the game to get a goal away from home and take the lead into half-time."

However, after yet more sloppy defending provided plenty of opportunities for Olympiacos to drag itself back into the match, Arsenal manager Mikel Arteta stressed the importance of eliminating errors with the North London derby against Tottenham coming up on Sunday.

"We have to be very clear and honest with ourselves that we gave three goals to the opponent and they took one, and at that level they are going to punish you," Arteta told the media afterwards. 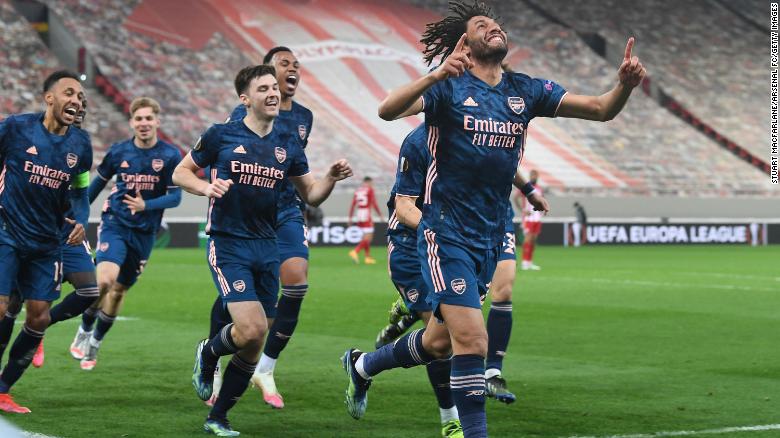 "So to go to the next level, we have to stop doing that and be more ruthless -- and when you are that dominant and playing that well, just kill the game.

"The goals or the chances that we have conceded are coming from ourselves. That is really positive because the moment we stop it we will be even stronger. "But the reality is that we have to stop it immediately because if not the games are always there to drop points."