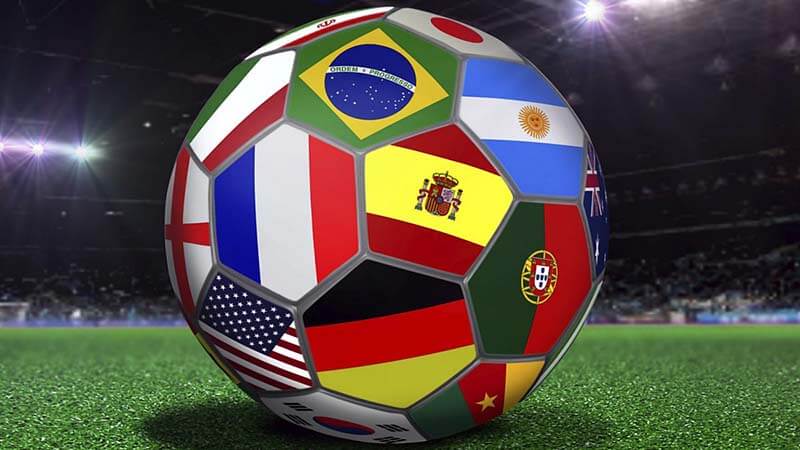 (CNN)-Cristiano Ronaldo's "unforgivable error" in extra-time against 10-man Porto in the Champions League proved decisive as Juventus was dumped out by the Portuguese side.

With the sides all-square in the 115th minute and with penalties just minutes away, Porto was awarded a free-kick 35 yards away from the Juve goal.

In a last-ditch attempt to send the Portuguese side through, Sergio Oliveira hit a speculative low shot which traveled through the legs of Ronaldo -- who had turned his back on the ball -- and squirmed past the diving Wojciech Szczęsny in goal.

That gave Porto a 4-3 lead on aggregate and although Adrien Rabiot scored for Juve, it wasn't enough for the Italian giants as Porto, who had to play for over an hour of the game, went through to the Champions League quarterfinals on away goals.

After the game, former Juve and Italy manager Fabio Capello criticized Ronaldo's part in the decisive goal, calling the turning of his back "unforgivable."

"There are single mistakes and (mistakes due to) loss of concentration on all the goals conceded," Capello said while working as a Sky Sport Italia pundit.

"Before the ball is kicked, Ronaldo has already turned: it is very serious. If you're part of the wall, you know that you can be on the receiving end of a powerful shot, it is an unforgivable mistake that is unjustifiable. In Porto there were 70 minutes not played and 20 played by Juve.

"Tonight, it conceded goals and the game was immediately uphill. Apart from Chiesa, who made the difference? All the others seemed a bit jaded, the players of Porto had much more rhythm." 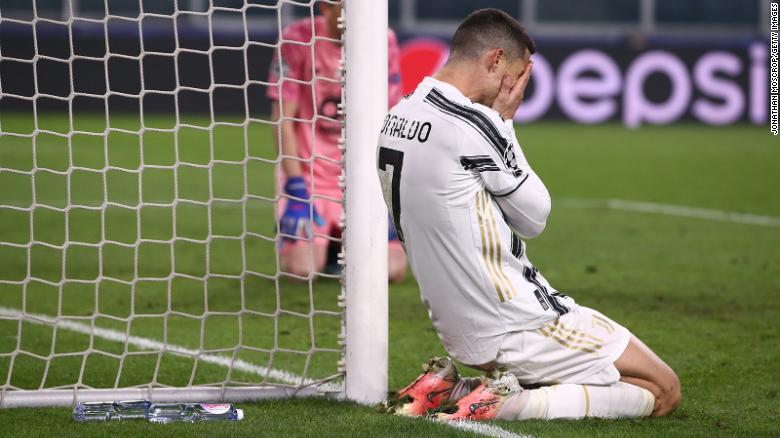 Ronaldo reacts after missing a chance against Porto.

The signing of Ronaldo from Real Madrid in 2018 -- at $117 million, now the sixth most expensive transfer of all time -- was meant to end Juve's long Champions League drought, but for the third year running it hasn't worked out that way.

Ronaldo and Juve have not made it past the quarterfinals, going out to Ajax, Lyon and now Porto.

Dominating Italian football -- Juve has won the last nine Serie A titles -- the Champions League just looks like a puzzle the Bianconeri is incapable of solving.

Having helped Real to four Champions League titles in five seasons, scoring in the 2014 and 2017 finals, Ronaldo was to be the missing piece in the Juventus jigsaw.

Juve last won the European football's top prize in 1996. Subsequently Juve has reached nine finals in the competition's various guises, winning just twice. It is the first club to lose seven finals. Only Bayern Munich, AC Milan and Real Madrid have played in more finals, and all three clubs have a better conversion rate, winning at least six or more titles each. 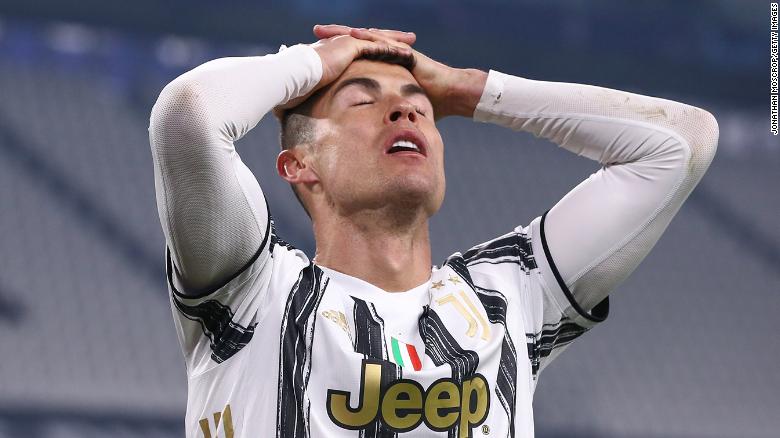 Ronaldo reacts during the game against Porto.

This season, with first-year manager and club legend Andrea Pirlo at the helm, performances have flattered to deceive -- and not just in Europe.

In the league, Juve sit 10 points behind leaders Inter Milan, and it lost the first leg of its round of 16 Champions League tie with Porto 2-1.

Tuesday's return leg in Turin couldn't have started any worse for Juve.

But, after the halftime break, Juve looked galvanized as a brilliant double from Federico Chiesa restored parity.

After Taremi was sent off for petulantly kicking the ball away before Chiesa's second, it looked for certain that Juve would eventually progress.

However, a defensive masterclass from the 10-man Porto, led by 38-year-old Pepe, halted their opponents and took the game into extra-time. 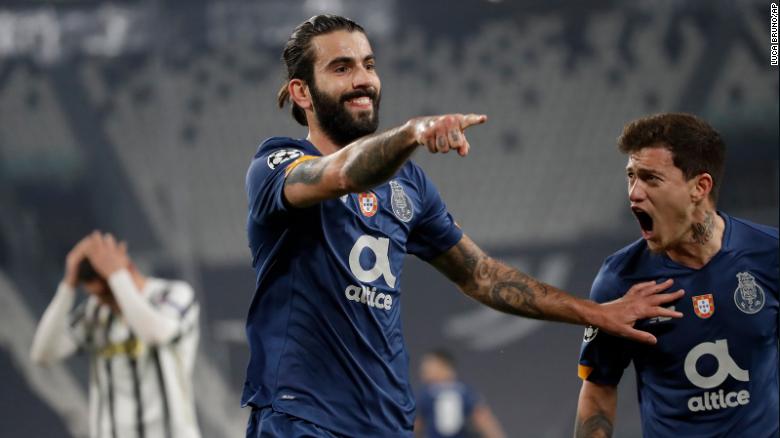 Oliveira celebrates with Otavio (right) after scoring the opening goal against Juventus.

Porto goalkeeper Agustin Marchesin was at his best as the game wore on and his teammates repaid him, as Oliveira's low free-kick sneaked through Ronaldo's legs to decide the tie.

And while Rabiot's thumping header made things nervy, Porto managed to hold on, with substitutes sprinting on in celebration, staff embracing each other, and players strewn over the Turin pitch in jubilation and relief.

"It is a unique feeling, to score two goals here," Oliveira said. We are very happy with our qualification. We clearly deserved it. It is a source of pride for the club and also for our country.

"We had to suffer, we had to play deeper many times, but we always looked for the goal. We are immensely happy."

Porto's qualification for the quarterfinals took extra importance as it happened exactly 17 years to the day since Jose Mourinho's famous celebration at Old Trafford when he was Porto manager, knee sliding down the touchline after Francisco Costinha's last-minute equalizer sent his side to the quarterfinals. 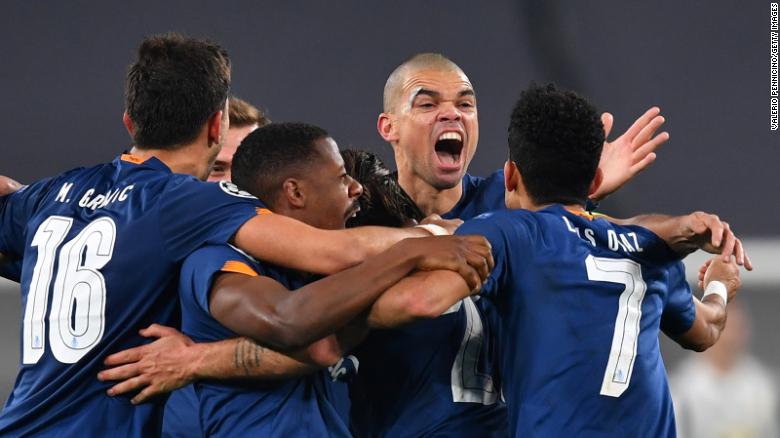 Oliveira celebrates with teammates after scoring their side's second goal against Juventus.

Juve's Champions League exit came against the backdrop of forthcoming changes to the competition.

The Serie A club's chairman Andrea Agnelli has said he believes domestic leagues will have to reduce the number of teams involved to incorporate an expanded Champions League.

The Italian, who is also the chairman of the European Club Association (ECA), has been a driving force behind the proposed new-look continental competition which will begin in 2024 with 36 clubs instead of 32.

Teams would play 10 matches in the autumn rather than the current six in the group stage, as part of a 'Swiss system' within a 36-team league.

Agnelli gave the ECA's approval to UEFA proposals for the format changes to the Champions League, before saying domestic leagues will have to change to accommodate it.

"The balance we are trying to strike is one-third international [games] to two-third domestic," he said following the ECA's general assembly on Monday.

"We have countries such as England with the maximum number of games at 53 or 54, Germany is 43. So it's having a balanced competitive landscape.

"We do think that currently, for competitive balance purposes, 20 teams in leagues -- it's not just the big leagues, but in many leagues -- there are too many."