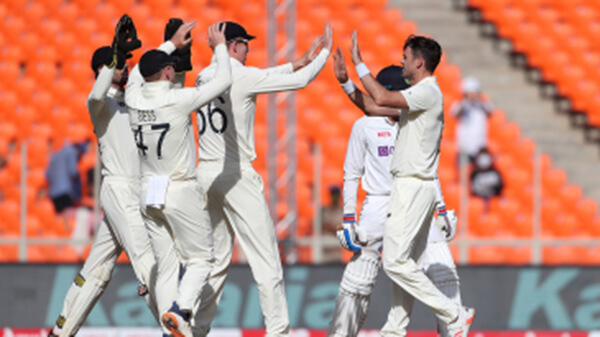 Welcome to day two of our live report of the fourth India-England Test from Ahmedabad. Join us for updates, analysis and colour. You can find our traditional ball-by-ball commentary here

*Most recent entry will appear at the top, please refresh your page for the latest updates. All times are local

A day of two halves in Ahmedabad saw India seize control of the fourth Test, as an innings of two halves from Rishabh Pant cut England down to size. Pant's maiden hundred on home soil was a masterpiece of adapting his game to the demands of conditions and match situation, and by the time he had flamed out, English hopes of hanging in the game had largely gone up in smoke.

Seeking the sort of first-innings runs that would define the contest, India had stuttered and stumbled to 146 for 6 during the afternoon session, as England succeeded in their attempts to control the run rate while making regular incisions. Ben Stokes, who hurled himself through 20 overs in the day for the wickets of Virat Kohli and Rohit Sharma, and James Anderson set the tone from the outset as Joe Root shuffled his hand adroitly in defence of his side's mediocre efforts with the bat.

But the struggles of Dom Bess left England's four-man attack stretched, as a century stand between Pant and Washington Sundar wrested back control. Initially, runs came in circumspect fashion as India sought to rebuild, and had Bess been granted an lbw decision when Pant had 35 - Nitin Menon's call was upheld by the narrowest of margins on DRS - things could have taken a wholly different course. As it was, Pant took the game into his own hands.

A watchful half-century from 82 balls provided the kindling for Pant to ignite against a toiling opposition late in the day. Sparks flew and runs flowed, England's plans to bowl dry blown clean out of the water on a parched late Gujarati afternoon, as Pant raced on to his hundred in the space of another 33 deliveries. He fell moments later, but Sundar carried on the good work to the close to leave India in sight of 300 and a potentially decisive lead.

It's not been Dom Bess' day, and he still can't buy a wicket for love nor money. He thought he had trapped Sundar lbw, but Ultra-Edge revealed a thick spike on review and the on-field decision was overturned. His struggles will doubtless be a talking point overnight after a difficult return to the side. 141 runs and just one wicket in the final session, and that chink of light for England has quickly turned back into darkness.

He was slipstreaming Pant for much of the afternoon, but this has been a fine knock from Washington Sundar, too. Anyone who took notice of his Test debut in Australia earlier this year would know he can bat; but his second Test fifty, reached via a brace of back-foot off-side carves that have been a feature of his innings, has further bolstered India's position in this Test. Stokes is back as Root shuffles his options but England look to be running on empty.

And like a typhoon sweeping through, almost as soon as the winds have whipped up then they are gone! Anderson scrags the young punk, though it was more a case of living and dying by the sword: Pant swung hard but picked out midwicket on the pull, Root holding on to a stinger to end a 113-run stand. But Pant takes the ovation as he walks off, he has forged a position of some strength for his side. Goes to his hundred with a slog-swept six! A touch of the Sehwags, a hint of the Gilchristian, but you suspect Rishabh Pant is a complete one-off. Having anchored the innings for an 82-ball half-century, he's only needed another 33 to get his century. Incendiary batting and it has turned the heat up on England, to the delight of a vocal crowd at Motera. 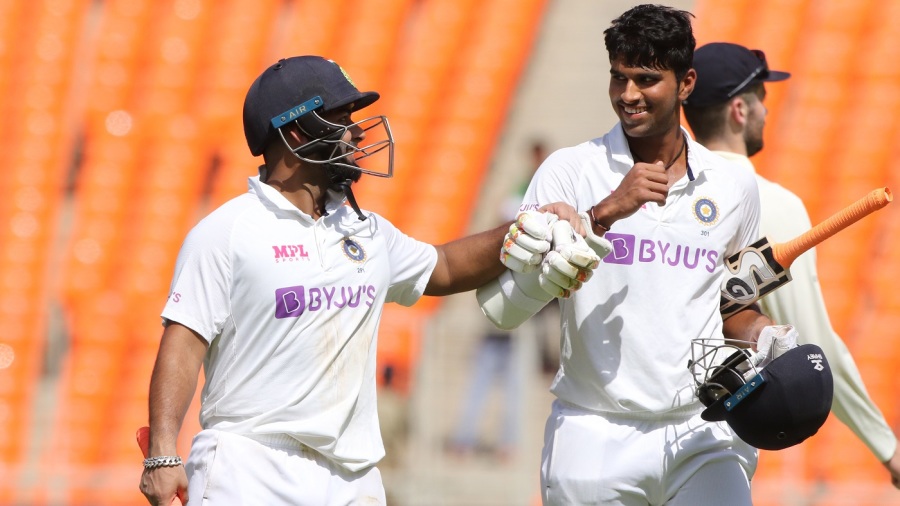 England take the second new ball, the venerable James Anderson trooping to the top of his mark. Anderson smiles about as often as Morissey in at a meat market, and standing in the mid-afternoon heat, you can imagine he's had his fill of hard yakka. But the hard, new sphere in his hands could unlock the game for England again, so in he runs, lands the ball on a 'kerchief outside off... and here comes Rishabh Pant, destroyer of worlds, slapping his first delivery on the up through mid-off. Next ball, he's crouching and flat-batting a cut for four more. Anderson has only conceded 19 runs from his previous 102 balls, now Pant is tucking in. A zippy bouncer sits him back, but the momentum has shifted in this innings.

Next over he whips Stokes to the right of midwicket, before Washington Sundar throws the bat for a couple more boundaries. Then comes the coup de grace, a reverse-scooped four over the cordon to bring up the hundred stand for India's seventh wicket! The impudence of youth, and Anderson actually allows himself a wry semi-smile now. What can you do?

Speaking of England beginning to flag, Pant senses the moment and decides to buckle his swash against Stokes, before the arrival of the new nut. First he slashes a fat top edge over the cordon, then wallops a pull in front of deep midwicket, to draw the scores level. A couple more poked through the covers takes India into a first-innings lead, and Stokes looks spent, losing the ball in his delivery stride, then delivering a beamer to Sundar. Wheels ever-so-slightly coming off. James Anderson and Ben Stokes chat in the middle © BCCI

England have turned back to Ben Stokes, with the new ball five overs away. The longer this partnership stretches on, the more it puts into focus the struggles of Dom Bess, as well as the decision to go in with only two other frontline bowlers. James Anderson will be readying himself for another burst, and given Stokes' mentality, he could just bowl on through. But with India approaching a lead, and still four wickets standing, for the first time today the tourists are looking a bit flat.

Skips out and nudges through mid-on, that's a half-century for Rishabh Pant - from 82 balls, his second-slowest in Tests (after a certain knock at the Gabba). The Ahmedabad crowd get their gratification, after Rohit missed out on his landmark earlier in the day, as India continue to steadily erode the deficit through this seventh-wicket pair.

A calmness and maturity about Pant’s batting today. Very impressive. A huge hour of the game coming up...#INDvENG England go back to Jack Leach in search of control after Bess' four-over spell costs 19. In a low-scoring game, it can take just a partnership or two to tip the scales one way or another - Pant and Sundar have now added more than 30 together, bringing first-innings parity within sight for India. India 153 for 6 (Pant 36*, Sundar 1*) trail England 205 by 52 runs England chipped out two more wickets during the afternoon session, including the key scalp of Rohit Sharma, as they kept alive hopes of parlaying an unexpected first-innings lead in Ahmedabad. With Rishabh Pant reining himself him to score an unbeaten 36 from 62, India went to tea precariously poised six down.

Rohit and Pant had eased along to a 41-run stand after lunch when Ben Stokes struck as the drinks break approached. Rohit fell one run short of his third 50-plus score of the series, lbw to a nip-backer that went with umpire's call on DRS. Jack Leach then had R Ashwin caught at short midwicket, and England's afternoon could have been even better if Nitin Menon had raised his finger to a Dom Bess appeal against Pant that was deemed to be clipping the bails in the last over before the interval. He has now been given a breather, but Stokes has really pulled a shift as England's second seamer in this match. This is the most number of overs he has bowled in an innings since the 2020 New Year's Test in Cape Town - when he helped batter down the door on the final evening at Newlands. He had only delivered 15 overs in the series to this point, but has sent down 17 over the course of days one and two in Ahmedabad, claiming the wickets of Virat Kohli and Rohit Sharma while going at less than two an over. Whether it's Chattogram, Colombo or Headingley, he does like to get his hands dirty with the ball. 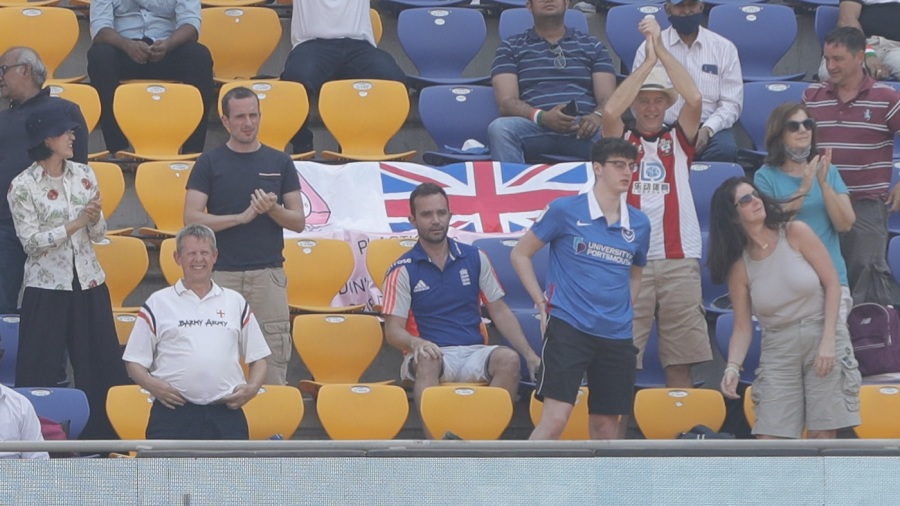 Ashwin survived a peppering from Stokes, but he isn't able to hang around for long as England bag their sixth wicket. Jack Leach gets his second of the day, well held at short midwicket as Ashwin attempted to work to leg. Still a bit of batting to come in the shape of Washington Sundar and Axar Patel, but a lot on Pant's shoulders now, as India seek to better England's 205.