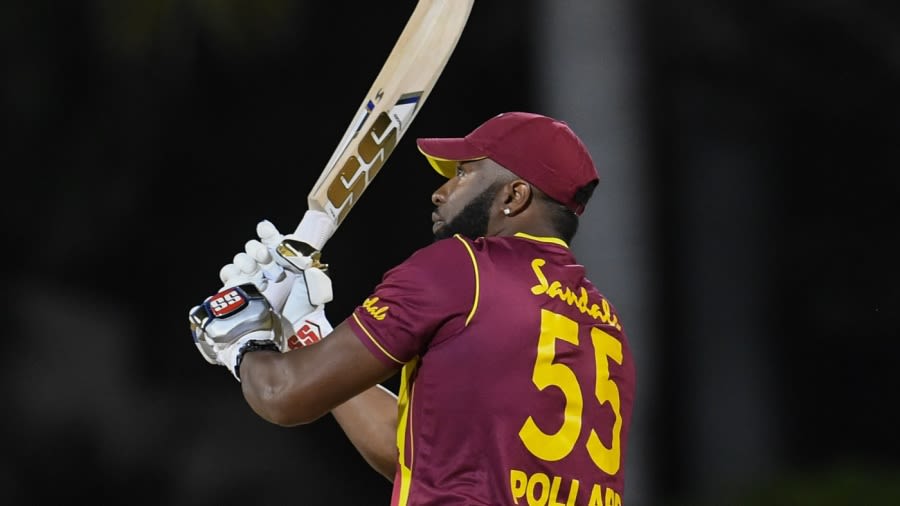 How Kieron Pollard hit six sixes in an over

During an extraordinary run chase in the first T20I against Sri Lanka, Kieron Pollard became just the third batsman to hit six sixes in an over in international cricket following Herschelle Gibbs in the 2007 World Cup and then Yuvraj Singh at the 2007 T20 World Cup. Here's how he did it.

Pollard goes down on one knee and slogs this length ball over long-on. There was a shout of catch it but Pollard cleared the boundary by some distance

This time muscles it into the sightscreen. Too full from Dananjaya this time and Pollard just latched onto this

Another hat-trick of sixes. Fuller and a touch wider but it makes no difference to Pollard, who smashes it over wide long-off. Pollard isn't worried by those quick wickets

Make that four in a row! What a bizarre day for Akila Dananjaya, who has been clubbed for four successive sixes after a hat-trick in the previous over. Was a length ball around off and Pollard slogged it over deep midwicket. He hit it with the spin and it keeps sailing

Are we in for six sixes in an over here?

Whoa! Five sixes in five balls for Kieron Pollard. This is carnage. A length ball outside off, Pollard rocks back and uses all his power to launch it straight over the bowler's head

He has to go for it now, Pollard. Dananjaya goes around the wicket, Will it make a difference?

no, it doesn't. Kieron Pollard has smashed six sixes in an over here. Yuvraj Singh has got company. Fired in on to pads and a chip, just a mere chip and it flies over the deep midwicket boundary. A bow from Pollard to acknowledge the applause from his team-mates