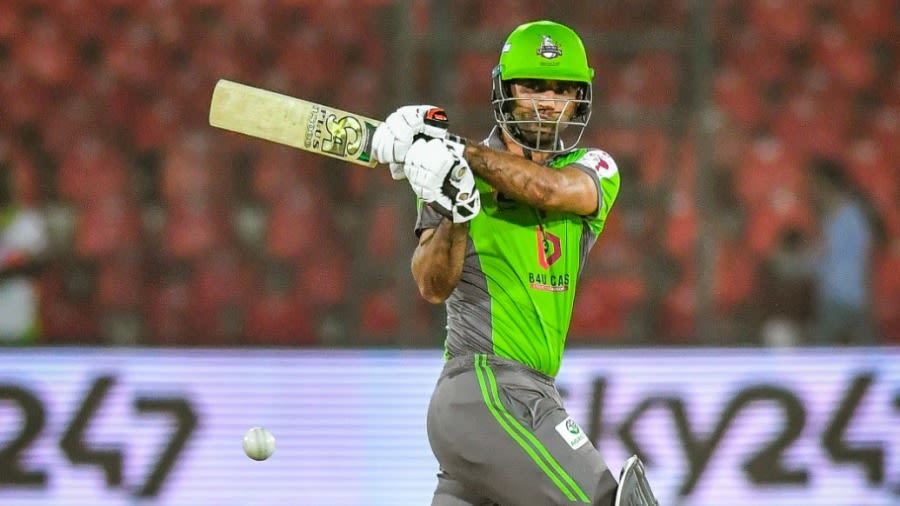 In a game that had all the ingredients fit for a contest between franchises representing the two biggest cities in Pakistan, Lahore Qalandars came out on top, defeating Karachi Kings by six wickets - in the final over - to move into the top two of the PSL points table. Qalandars' win made it 11 in a row for chasing teams this season, with the side batting first still searching for victory in PSL 2021. It was a fascinating match that had plenty of chirping, a whole lot of sixes, and an overdose of entertainment, fit for a ground that now allows up to 50% attendance for fans.

The second innings began with the Kings roaring on the back of three wickets in the Powerplay, but a 119-run fourth-wicket stand between Fakhar Zaman (83) and Ben Dunk (57) brought the Qalandars back into the match. When Zaman fell, Kings had a sniff once again, but David's Wiese's nine-ball cameo of 31 extinguished those hopes, securing a Qalandars win with four balls to spare.

Kings' first-innings performance, where they reached 186 for 9, was quite similar to the chase. Like the Qalandars, they lost three wickets in the Powerplay before half-centuries from Sharjeel Khan (64) and Mohammad Nabi (57) lifted their innings. However, they could add only 24 runs in their last four overs while setting a total, and in the end, that was the difference between the two sides. A big reason why Kings scored at only six per over in the death overs was because of Shaheen Shah Afridi's accurate bowling. He finished with 3 for 27.

Shaheen cranks it up

After conceding two boundaries in his first three deliveries with the new ball, Shaheen eked out the early chance for a breakthrough when Sharjeel mistimed a shot to mid-on, only for Qalandars captain Sohail Akhtar to drop the catch. Shaheen's second over was consistently quick. He nearly got a run-out in the second ball of the third over when he tried to kick the ball onto the stumps at the strikers' end. Two balls later, a second chance was dropped off Shaheen, when Babar Azam flayed an edge to wide first slip. Then Shaheen conceded five wides when he missed the yorker only for it to slide down the leg side. But he had the last laugh in his opening spell, when he knocked Azam's middle stump back with a length ball that moved in and went past the inside of the batsman's blade. Shaheen enjoyed the wicket a lot, perhaps a bit too much, such that once he recovered from the high of the dismissal, he hugged Azam.

After bowling two of the first three overs, Shaheen was taken out of the attack. He returned at the end of the 17th with Kings at 168 for 6 and then proceeded to trouble the Kings' lower-order batsman. Shaheen nearly dismissed Waqas Maqsood with back-to-back yorkers in the 18th finally removed him in the 20th with the same ball. He then proceeded to york Mohammad Amir as well - with a massive celebration once again. He ended the innings with a 151kph delivery to restrict Kings to 186 for 9.

After Azam fell in Shaheen's third over, Kings slid further when they lost Joe Clarke and Colin Ingram off back to back deliveries in the fifth. Clarke was run-out for 4 trying to complete a single while Ingram was out to an Ahmed Daniyal yorker for a first-ball duck.

That brought Sharjeel and Nabi together and they responded by smoking 16 runs off the sixth over, delivered by Mohammad Hafeez. Sharjeel was the aggressor, hitting sixes off Haris Rauf and Wiese in the following overs, the latter bringing up his half-century in the tenth over off 34 balls. Nabi then hammered Samit Patel for two sixes and a four in an 11th over that leaked 21 runs before Sharjeel fell at the start of the 13th trying to look for another big hit. Sharjeel's 39-ball 64 had 56 runs that came off either fours or sixes.

Nabi then took over from where Sharjeel left, hitting Wiese and Rauf for plenty in the late middle overs, helped by some wayward deliveries that included a useful mix of full tosses and short balls. However, he fell in the 16th over for his 35-ball 57 when he sliced a Rauf slower ball to extra cover. Christian brought out his long handle to clobber a 14-ball 27 but his dismissal, coupled with Imad Wasim's deflated Kings' charge into the death overs. They went at just six per over from overs 16 to 20 to set a total far lesser than the 200-plus they were aiming for at one stage.

Shaheen's over-the-top celebration at dismissing Amir, who batted at No. 10, probably fired the senior bowler up because when he took the new ball in the chase, he was raring to go. With Zaman not finding a run off the first three balls, Amir went up to the batsman to say a few words, and off the fourth ball eked out a wicket. Zaman, trying to get Qalandars off the mark, tried to take a single, only to cause a run-out that saw Sohail out for a duck without facing a ball. Amir then bowled a full ball to No. 3 Joe Denly to bowl him for a first-ball duck as the first over was a double-wicket maiden. His second over - the chase's third - was equally entertaining but yielded seven runs. However, the opening spell was menacing.

Like Shaheen, Amir was taken off the attack after two overs and only returned at the death. On that occasion, though, his fortunes changed. Although he conceded just seven in the 17th over, the 19th went for plenty. Dunk set the tone for the 19th with a four off a wide delivery after which Wiese hit him for two fours and a six. When Amir came to bowl his final over, Qalandars needed 30 off 12. When he was done, they needed 10 off six.

Zaman, Dunk set up the win

When Zaman and Dunk came together at 33 for 3, it seemed that for the first time the chasing side would lose a PSL 2021 match. The in-form Hafeez and Clarke were already gone, and Dunk was not in form. However, Zaman was hitting it clean. He struck two sixes and three fours off Mohammad Ilyas, and two sixes of Arshad Iqbal in the first eight overs to keep the asking rate in check. He then tore into Nabi, Christian and Maqsood to sprint to a 36-ball fifty while Dunk was still struggling at a run-a-ball 26.

After the 12th over, though, with Qalandars needing 93 off 48, both batsmen stepped up a gear. Dunk matched Zaman stroke for stroke against Nabi and Maqsood such that by the 17th over came, the Australian had reached his fifty in 39 deliveries and Qalandars needed 36 off the last three overs.

Zaman then fell to Christian courtesy a slower ball, but the momentum had already shifted Qalandars' way courtesy the century stand for the fourth wicket. Wiese came in to bat firing all cylinders and Dunk then turned into spectator. Wiese's annihilation of Amir's final spell left only 10 to get off the final over, and he needed just two balls in the 20th - delivered by Christian - to take Qalandars over the line. Dunk finished unbeaten on 57.