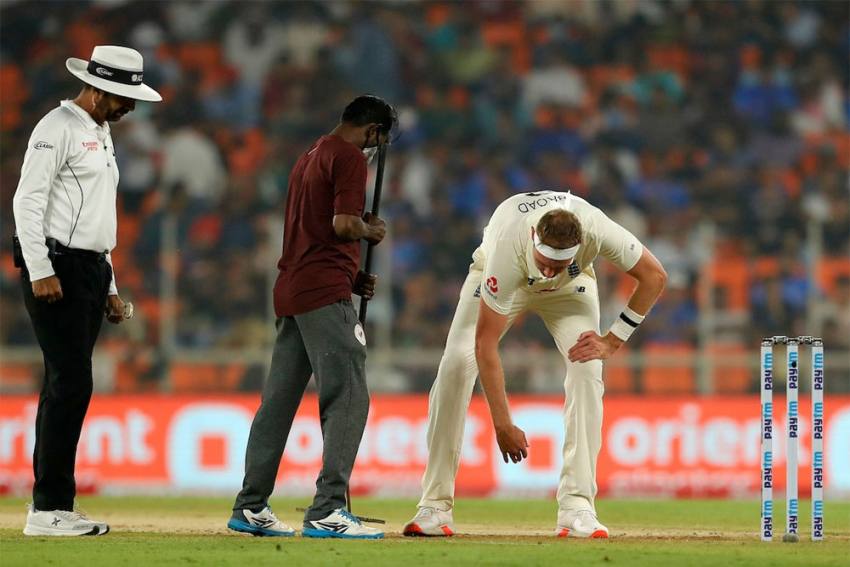 India v England: Was the Ahmedabad pitch that bad?

Not since last week has a pitch caused so much debate.

At a time when Nasa has successfully landed its Perseverance rover on Mars, England might be thinking they would be better off playing India on the red planet.

If the tourists are saying little about the Ahmedabad pitch on which they were given a third-Test hiding, that has not stopped plenty of others from discussing its suitability for international cricket.

Former England captain Michael Vaughan said it was "awful" and ex-skipper Alastair Cook said the Test was "tough to watch". 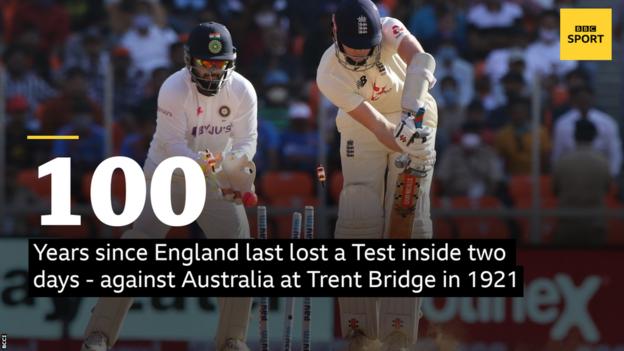 Is the criticism fair, or just pointless spin?

What's all the fuss about?

Not only was it thrilling, compelling and, at times, downright bizarre, the third Test was also incredibly unusual.

Of the 2,412 Tests ever played, only 22 have finished inside two days and half of those were before World War Two, when pitches could be pretty moody. This was the shortest completed Test since 1936.

Twenty-eight of the 30 wickets fell to spin, which is a high ratio even for Asia, where spinners have taken roughly three for every two by pace bowlers since 2010.

While it is fair to say these numbers are not solely down to the pitch - captains Joe Root and Virat Kohli admitted the batting from both teams wasn't up to scratch - the pitch certainly played a big part.

Former England spinner Phil Tufnell said the pitch had "taken the skill away from the players", with ex-captain Andrew Strauss going further, describing it as a "lottery".

There is perhaps no other sport where the strip of turf on which it is played affects the outcome as much as cricket.

Accusations of impropriety can be incendiary and trenchant views can often follow national lines.

Was the pitch in Ahmedabad a bad one? That depends on what you consider to be 'good'.

Was the pitch really that bad?

The debate surrounding the strip in Ahmedabad comes hot on the heels of the attention attracted by the pitch for the second Test in Chennai, which behaved similarly, if not to the same extent. It is also worth noting India managed more than 600 runs in that match.

Traditionally a 'good' Test pitch would be one that is seen to offer an even contest between bat and ball, with encouragement for bowlers of all kinds at various stages of the match.

However, a 'good' pitch does not have exclusivity when it comes to producing exciting Test cricket. Part of the challenge and attraction of the longest form of the game is the variety of conditions, with succeeding away from home in alien surroundings one of the great achievements.

There is also nothing untoward with teams, within reason, exploiting home advantage. India have found themselves on the wrong end of conditions in England in the past and probably will again at some point during their trip to the UK later this year.

The problem comes when conditions are pushed to an extreme, with batsmen or certain bowlers having such an advantage that the integrity of the contest is compromised.

Was that line crossed in Ahmedabad?

There were certainly times when it seemed like the spinners only had to roll their arm over and a wicket would follow. Without being disrespectful to Root's off-spin, the England skipper picking up five wickets for eight runs in 38 deliveries would suggest there was too much assistance for the slow bowlers.

Yet England were 74-2 in the first innings. India were 98-2 in their first and made 49-0 in their second to seal victory.

Scoring runs was a challenge, but perhaps made to look more difficult by the errors of the batsmen. 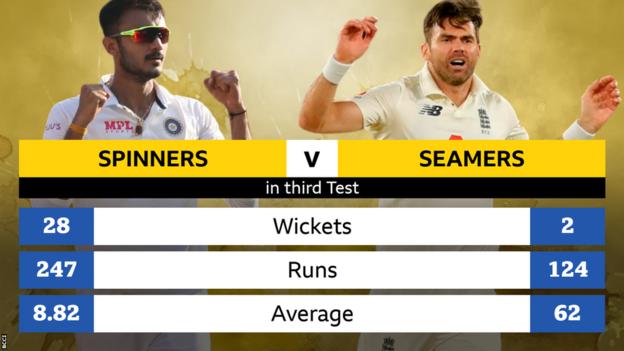 Is it just sour grapes from England?

It's important to state that England have not complained about the pitch. Not publicly, at least.

Asked if he thought the pitch was sub-standard, Root said: "It's a tricky one to answer. Every now and then you expect to deal with a surface that is quite challenging. It's not for players to decide if it's fit for purpose. That's up to the International Cricket Council."

Coach Chris Silverwood was similarly diplomatic when he said: "Whatever the pitch did or didn't do, India ultimately played better than us, but it probably pushed us to the extremes of what most of our players, if any, have experienced."

In some ways, the fact India have resorted to playing the past two Tests on pitches that have offered excessive turn is a backhanded compliment to England.

The first Test, on a pitch not nearly as helpful to the spinners, was won handsomely by the tourists, who made 578 in their first innings. Faced with the prospect of a first home series defeat in nine years, India reverted to what they know best.

"It seemed a normal pitch to me. I don't see anything the pitch did," said Rohit, who reiterated Kohli's view that the batsmen on both sides were as much to blame as the pitch.

While criticism has come from the likes of Vaughan and Strauss, the pitch has been defended by India legend Sunil Gavaskar, who said "real batsmen" would have found a way to score runs.

However, former India players VVS Laxman and Harbhajan Singh both said the surface was not ideal, while World Cup winner Yuvraj Singh tweeted he was "not sure" if it was good for Test cricket.

finished in 2 days Not sure if that’s good for test cricket !If @anilkumble1074 and @harbhajan_singh bowled on these kind of wickets they would be sitting on a thousand and 800 ??However congratulations to ?? @akshar2026 what a spell! congratulations @ashwinravi99 @ImIshant ?

Will anything be done about the pitch?

The closest Silverwood came to suggesting England would formally complain about the surface was saying he and Root would discuss their options.

The task of evaluating a pitch and the outfield falls to the match referee, who has six ratings to choose from. Three of those - 'below average', 'poor' and 'unfit' - result in a venue being issued with 'demerit points', which, when accumulated, can result in a ground being suspended from hosting internationals for up to two years.

Since 2019, seven Test pitches have been given a below average rating, resulting in one demerit point each. In the same time period, one pitch - the Wanderers in Johannesburg - received three demerit points for a poor rating, while nowhere has been deemed unfit (five demerit points).

With a total of five demerit points needed over a five-year period to trigger a one-year ban, it seems like a ground would have to get the pitch badly wrong on a pretty consistent basis to run the risk of a suspension.

When you also consider that pitch penalties do not affect a team's standing in the World Test Championship - unlike points deductions in domestic cricket's County Championship - the consequences for any nation or ground producing a sub-standard surface are minimal.

The fourth and final Test of the series, starting on Thursday, will again be played in Ahmedabad.

With the series still alive and India needing to avoid defeat to secure their place in the World Test Championship final, it seems fanciful for England to expect hospitality.

Even if there is not as much help for the spinners, the ball will surely turn, meaning England must arrest an alarming batting decline that has seen them return a total of 669 runs in their past five completed innings.

They must also decide how best to restrict the India batsmen on such pitches.

Despite his 5-8 first-innings performance in the third Test, the tourists must be cautious about expecting too much from Root's bowling, so that may mean a recall for off-spinner Dom Bess, who was dropped for the second Test and overlooked for the third.

Diplomatic they may have been, but England have been dragged into a spin war. They have little time to decide how they pitch their response.