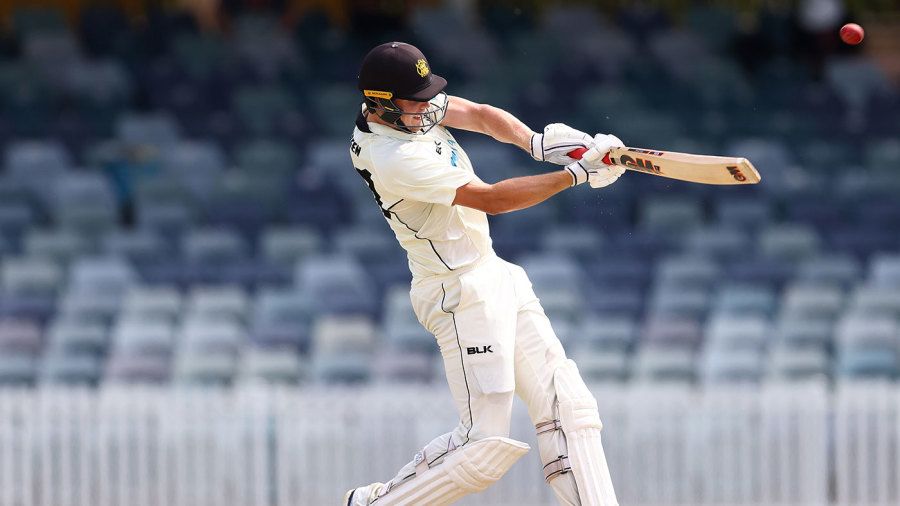 An intriguing final day was in prospect at the WACA after Cameron Green hit an unbeaten 168 before Western Australia declared behind to open up the game which was followed by a brief period where bowlers dominated.

Green was in sight of a maiden double century at tea (having made 197 earlier this season) when Shaun Marsh declared with the home side 101 behind on a surface that has been significantly in favour of the batsmen.

However, the Western Australia bowlers then took charge to rattle South Australia. Will Bosisto and Liam Scott were both taken at first slip by Marsh, Henry Hunt was given lbw to a very full delivery from Aaron Hardie and Travis Head, who made a double century in the first innings, edged an excellent delivery from Liam Guthrie to second to leave them 4 for 61.

South Australia were then put back on track to set a target on the final day by a positive partnership between Alex Carey and Harry Nielsen as the pair added 81 in 22 overs.

Led by Green, Western Australia enjoyed two sessions of batting dominance to comfortably avoid the follow-on. Cameron Bancroft, who scored a century on the second day, fell to the first over of the second new ball when he shouldered arms at Chadd Sayers, but Green brought up his second Shield century of the season - and sixth first-class hundred - with a strong on-drive in the last over before lunch.

After the interval Wes Agar produced an impressive spell which accounted for Hilton Cartwright, bowled through the gate, and Josh Inglis caught behind off an inside edge before Green and Hardie cut loose towards the tea break to added 61 in 10 overs.