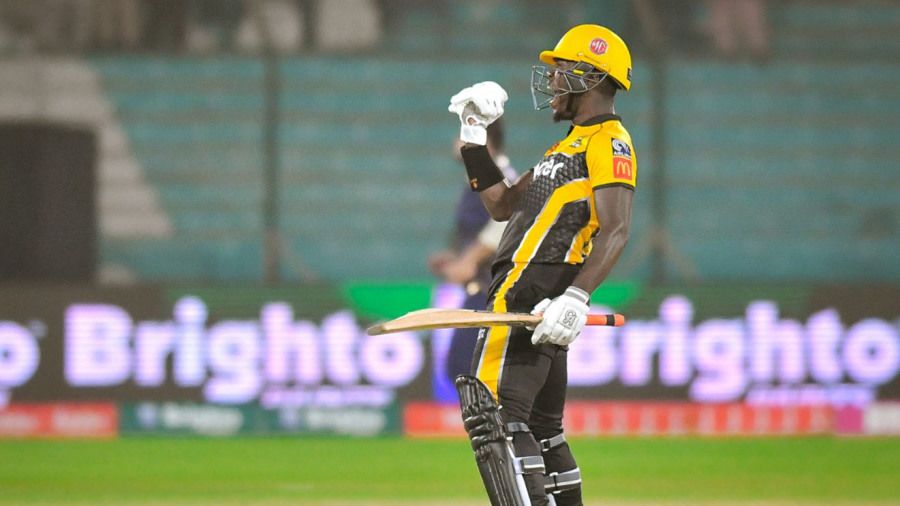 Having lost their first two games, Quetta Gladiators looked set to end their streak of defeats on Friday night, but a late charge from Sherfane Rutherford and Wahab Riaz took the game away from them and handed Peshawar Zalmi their second win in three matches.

Zalmi's chase of 199 was the highest of the season and it was the eighth-straight game in PSL 2021 where the chasing side won. The result takes the Zalmi to second on the points table while the Gladiators remain rock bottom.

After being asked to bat, Gladiators posted 198 for 7 on the back of a 105-run partnership between Sarfaraz Ahmed and Azam Khan. Sarfaraz, the Gladiators captain, hit 81 at a strike-rate of over 200 and Azam hit 47 in 26 balls. For most of the second innings, the target seemed too tough to achieve, but some wayward bowling in the death overs from Mohammad Hasnain and Dale Steyn changed the game's complexion.

For Zalmi, Haider Ali struck a 29-ball 50 while Imam Ul Haq and Shoaib Malik made useful contributions. But it was their lower-order batsmen, Rutherford and Riaz, who were the difference. Rutherford creamed 36 in his unbeaten 18-ball innings, while Riaz made amends for his poor bowling show - where he conceded 52 runs in four overs - by hammering 20 off just eight deliveries to seal a come-from-behind win.

Playing his first game of the PSL season, and fresh out of quarantine, Faf du Plessis came in at No. 3 for the Gladiators in the first innings after opener Cameron Delport fell for 2 in the third over. After taking a few balls to settle in, he got off the blocks by hammering Mohammad Irfan for four in the fourth over. When Irfan returned for the sixth over, du Plessis clobbered a six and two fours to end the Powerplay on a positive note for the Gladiators.

With Saim Ayub, the other opener, struggling to time the ball, it was du Plessis who ensured the early run rate did not fall below seven. But after Ayub's dismissal - run out by a direct hit from Rutherford - du Plessis looked to take the anchor role because Sarfaraz began aggressively. However, du Plessis perished in the 11th over for his 26-ball 37 when he holed out at deep extra cover, deceived by a Riaz slower ball. 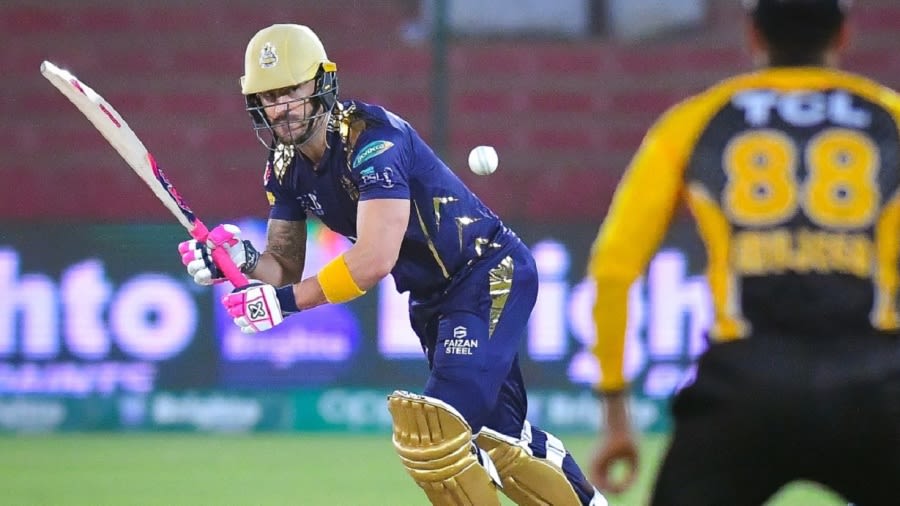 With 58 balls left in the innings and the score 86 for 3, back-up wicketkeeper Azam joined regular wicketkeeper and captain Sarfaraz in the middle. Sarfaraz began the early charge by playing a late cut off Riaz for four. Azam then found his feet, hitting England fast bowler Saqib Mahmood for back-to-back fours to end the 13th over.

When Riaz returned for his second spell in the 15th, Azam hit him for a 98m six before smashing two fours to the backward-point region for 16 runs off the over. The 16th from Mujeeb then went for 18 as Sarfaraz found the cover boundary, after which Azam hit a four and a six straight past the Afghan fingerspinner. The 17th from Mahmood then went for nine as Sarfaraz reached his fifty in 31 balls.

Sarfaraz then hit Irfan for three fours in the 18th to take the run-rate towards 10. With the Zalmi bowling unit looking deflated, Sarfaraz smashed Riaz next for 18 runs in four deliveries in the 19th. However, he fell off the last ball trying to clear the straight boundary. The fourth-wicket partnership came in just 55 balls.

At 193 for 4, and with six balls left, Gladiators were set to breach 200, but Mahmood returned with three wickets in his final over. He dismissed Azam, Ben Cutting and Mohammad Nawaz to finish with 3 for 34. But overall the Zalmi bowlers had a day to forget with Riaz (2 for 54) delivering his most expensive T20 spell, Mujeeb going at 11 per over and Irfan conceding nearly 40 in his four. At the halfway mark, Gladiators' 198 for 7 was the highest PSL 2021 total.

Gladiators strike early with the ball

Zalmi struggled early in the chase. After an entertaining first over from Steyn and a quick one from Hasnain, the Gladiators saw the back of Kamran Akmal after the batsman sliced Usman Shinwari to deep point in the third over. Although Imam kept the scoreboard ticking, the No. 3 Tom Kohler-Cadmore failed to make an impact from the other end, falling to Steyn when the last ball of an extras-filled fourth over ended with his dismissal.

Imam then found Haider for company. Together they hit a swift fifty stand for the third wicket. Both batsmen found boundaries at will, but Imam fell in the tenth over when he tried to come down the ground to Zahid Mahmood. Mahmood, seeing Imam come down the ground, dropped his length and the ball went under the bat to hit the stumps. The score, midway through the 11th over, read 79 for 3.

Haider, though, did now slow down, and with the experienced Shoaib Malik as his partner, they together kept hitting boundaries to keep the required run-rate in check. Malik's first boundary shot was a six over Cutting's head in the 11th over while Haider took on Shinwari in the 13th. Haider followed up a six with two fours off Shinwari to rattle the Gladiators enough that Sarfaraz could be seen talking at length with the bowler in an animated manner. The 14th from Zahid then went for double digits as Malik attacked the straight boundary. But the 52-run stand ended when Haider was outfoxed by a Steyn slower ball in his return spell at the start of the 15th over.

Rutherford, Riaz pull off a heist...with a little help

At the fall of Haider's wicket, Zalmi still needed 68 runs in 35 balls. Steyn finished the 15th over conceding only five and shifted the momentum Gladiators' way after which Cutting trapped Malik lbw in the 16th. That put the Gladiators in the driver's seat with Zalmi needing 41 off 18.