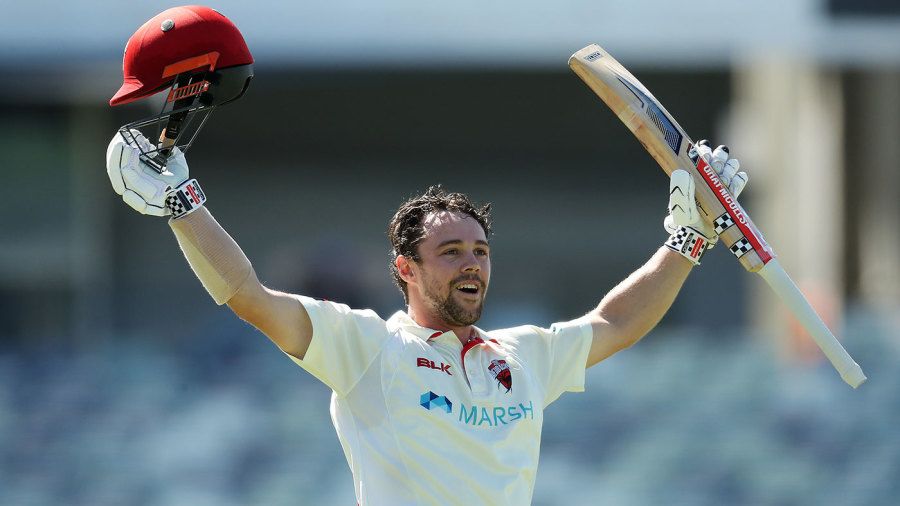 Travis Head flays Western Australia with 189 not out

In his first red-ball innings since being dropped from Australia's Test side, Travis Head scored an unbeaten 189 as South Australia dominated the opening day at the WACA.

Opener Henry Hunt also hit a century, adding 186 in 38 overs for the second-wicket with Head, as the Redbacks closed on an imposing 4 for 368 although Western Australia were lifted a little by being able to remove Alex Carey with the second new ball.

Head lost his place in the Test line-up after the second match against India at the MCG when the availability of David Warner and Will Pucovski to open required a reshuffle with Matthew Wade retaining his place and moving back to the middle order.

However, Head was given a boost earlier this month when he was included in the squad for the now-postponed tour of South Africa - at Wade's expense - with national selector Trevor Hohns saying they saw more growth potential in 27-year-old Head who averages 39.75 from 19 Tests.

This was a superb innings from him after he arrived in the 24th over at 2 for 66 following the dismissal of new No. 3 Liam Scott to an outside edge. Head feasted on the Western Australia attack with 25 fours and a six scoring at around a run-a-ball throughout: his fifty came from 54 balls, the hundred 107, the 150 from 162 and for a while a double hundred in the day was on the cards before he settled for being just shy of his career-best 192 at stumps.

Hunt brought up his second first-class century from 156 balls the over before Head reached his hundred. He fell shortly after tea, flashing an edge to slip off Cameron Green to end his wicketless run that lasted throughout the India series.

Carey, playing his first Shield match in 14 months after also being named in the Test squad, added 82 with Head before getting an edge into his pads which looped to gully off Cameron Gannon who had caused the left handers a few problems from round the wicket.