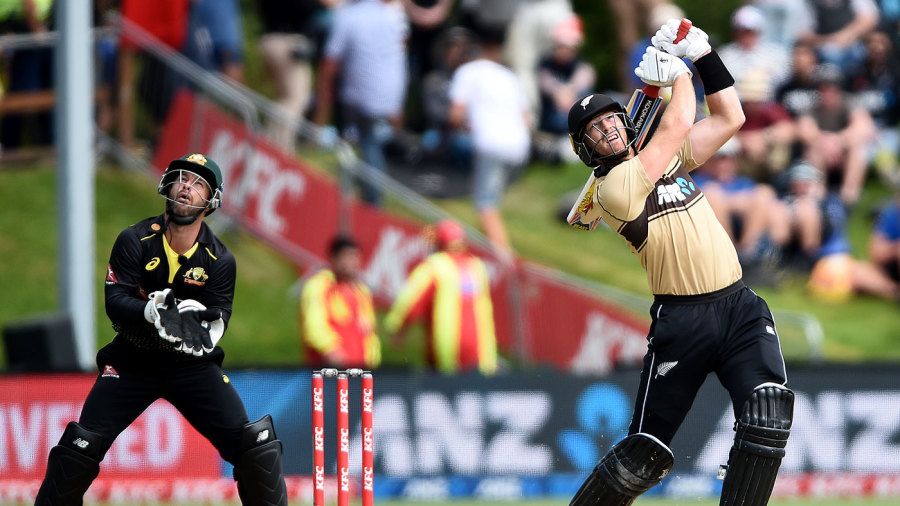 New Zealand effectively won this game twice. For most of the day they dominated Australia with the bat and then the ball, to a point when the game looked to be heading for an early finish. Left in a hopeless position, Marcus Stoinis and Daniel Sams chanced their arms to close things up to a realistic scenario, only to lose their poise when the way to victory had re-opened, allowing Kane Williamson's men to hold their nerve in the tight finish that eventuated.

New Zealand's momentum began with an overdue return to runs for Martin Guptill, swinging sweetly through the full ball as though on the golf course, with a pair of terrific supporting innings from Williamson and Jimmy Neesham - he and Guptill coshed no fewer than 14 sixes in Dunedin's first game between Australia and New Zealand since 2000.

The Australia chase began fairly, stuttered and collapsed at the hands of Mitchell Santner, before getting the latest of revivals from Stoinis and Sams. Spectacular as their hitting was - tallying nine sixes between them in a brief space of overs - it could not be sustained when the finish line loomed. Australia got closer than they might have expected at 113 for 6, but the 2-0 series margin after two games is undoubtedly a fair one.

Not since October had Guptill passed 50 in any format at first-class level; not since November 2019 had he done so in a T20I. What he needed after such a lengthy dry spell was some favourable conditions and friendly bowling, and by sending New Zealand in at University Oval and then serving up a steady diet of full balls well within his hitting zone, Australian obliged. Guptill's first ball, from Sams, was a half volley that skated to the cover boundary. His first from Jhye Richardson was another half volley that sailed back over the bowler's head.

With that, Guptill was more or less away. He was to clear the boundary no fewer than eight times, six of them in the arc between mid-off and wide mid-on, with another two hooked powerfully behind square leg. At his most destructive, Guptill crashed 34 runs from eight balls to move from 58 to 92. In the same period, New Zealand hammered 65 runs between overs 10 and 13 and set themselves up for a tally well and truly beyond 200. The aforementioned dry spell was well and truly over, replaced by a Dunedin deluge.

As Guptill was detonating in such spectacular fashion, Williamson played with his typical combination of intelligence, calm and just enough invention. At 13 from 16 balls while operating in Guptill's slipstream, Williamson had got himself set, and was duly able to "catch-up" by clouting 37 runs from his next 16 for a 32-ball half century. Among Williamson's more impressive moments was when he read a Jhye Richardson slower ball out of the hand and then set himself up perfectly to slog sweep it, as if delivered by a spinner, into the crowd at midwicket.

At the other end, Neesham walked out as though he was already well and truly set, dispatching his first two balls for towering sixes and then seldom letting up thereafter. New Zealand's momentum was briefly held up when Jhye Richardson won a generous interpretation of the "tramlines" for wides to contribute to Glenn Phillips' exit, but Neesham and Tim Southee combined to ransack 20 from Sams' closing over of the innings and ensure the hosts made the highest T20I total in matches between these countries at venues other than Eden Park. 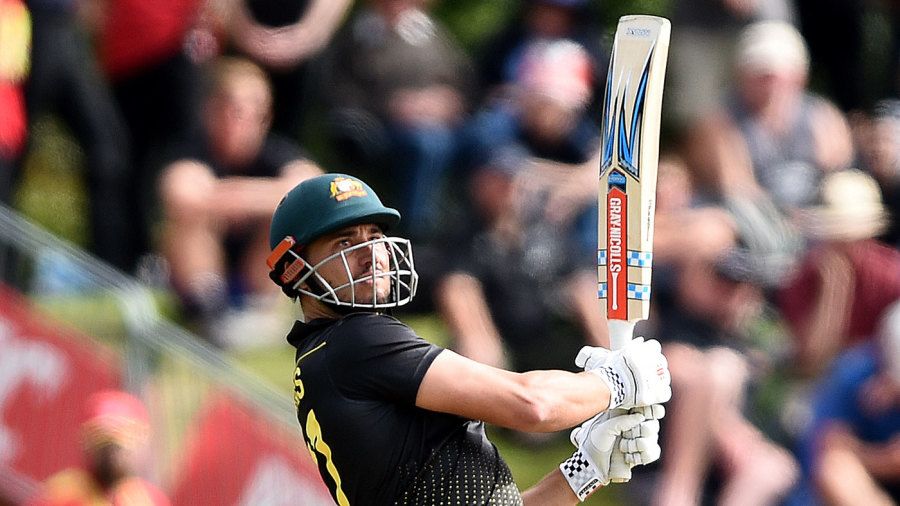 Marcus Stoinis brought Australia back in the contest in thrilling style

Australia's chase got off to a reasonable start. The ball did not swing much for Southee and Trent Boult, Matthew Wade found the boundary and Aaron Finch was given the chance to start steadily: 33 for 0 after three overs compared very favourably to New Zealand's 20 for 0 at the same stage. But from there the hosts were able to tighten things steadily with the help of scoreboard pressure, while at the same time the Australians felt the net closing in on them.

Wade, trying a back foot punch, failed to clear Williamson at mid-off; Finch, having spent 13 balls over 12, picked out midwicket when trying to clear the boundary off the bowling of Ish Sodhi; last and perhaps most pivotally given his abilities, Glenn Maxwell tried to reverse slog sweep his first ball from Santner and found Sodhi, leaping at short third man. At 87 for 3 in the 11th over, the innings was losing momentum in spite of a nice start from Josh Philippe in his second international, and the lower middle order was being left with an enormous task.

Back in 2017, Stoinis announced himself as an international cricketer of note by cracking 146 from 117 balls in an ODI at Eden Park that had appeared a lost cause before he took his team within a handful of runs. There were undoubted parallels four years later in Dunedin, as Stoinis sized up a chase that had reached the realms of the decidedly implausible. With six overs remaining, the visitors required 98 runs and had just four wickets in hand, as Stoinis and Sams conferred.

Their response was to swing for the fences with a clarity that had been missing up to that point, as 62 runs piled up in the space of three overs: courtesy of sixes sixes and four fours in that time to take the equation back to 36 from three overs. A superbly tight 18th over from Boult, and a fortuitous deflection of a Sams drive from the umpire Chris Gaffaney, gave New Zealand 30 runs to play with from the final two overs, then 15 off the last, bowled by Neesham.

Sams and Stoinis struggled a little to hit full tosses in these closing overs, and it was one such ball that Neesham coaxed Sams to miscue to deep midwicket. Two more dots - including a declined single - made it 15 off three. Stoinis middled the fourth ball to leave nine from two, but when he shanked the fifth to be out for 78, the day belonged to New Zealand.