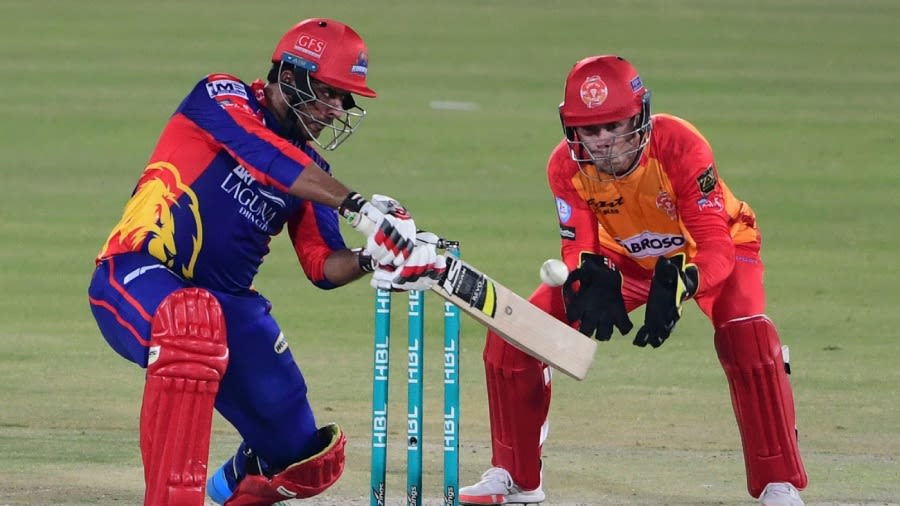 Chasing 197 in the final over might suggest this game was something of a humdinger. In truth, it was an error-strewn, sloppy contest that few on either side deserved to win. As is often the case with games like these, Islamabad United so often find a way to get over the line, as they did on Wednesday, withstanding an astonishing 59-ball 105 from Sharjeel Khan.

The Karachi Kings opener looked destined to have cost his side the game as he struggled, almost woefully, for fluency in the Powerplay, but 94 off his final 35 balls helped power his side to the highest first-innings total of the tournament. It was his opening partner Babar Azam whose 54-ball 62 ended up as the notable match-losing innings. He might have been the one keeping the run rate afloat while Sharjeel stuttered, but fell away badly at the death when a power-hitter's presence might have propelled Karachi more than the 196 they ended up with. Islamabad responded by attacking from the outset, spearheaded by Alex Hales and Faheem Ashraf in the Powerplay, and even as the wickets fell, they continued to go after their shots, refusing to allow the asking rate get out of hand. An invaluable 94-run stand between Iftikhar Ahmed and Hussain Talat held things together through the middle overs, and while Karachi were never out of the game until the penultimate over, they never quite found an effective way of building any sort of pressure on the chasing side.

It was a contest defined by, at times, shocking bowling and fielding, especially by Islamabad, who took no fewer than three wickets off what ended up being no-balls, and dropped three further catches, not taking a wicket until the 19th over. By that time, Karachi's opening partnership had put on 176, the highest stand in PSL history. But Karachi would be equally profligate with the ball, leaking 14 extras. Mohammad Amir's inaccuracy at the death would prove to be the final nail. Asif Ali smacked a knee-high full toss he bowled for six to level up the scores, and Iftikhar did the honours with five balls to spare.

Star of the day

This man was almost nailed on to wind up in the column below - with the multiple dropped catches in the field - but by far the most significant reason Islamabad even got close in this game was a whirlwind of a cameo from Hales. Imad Wasim and Amir had helped Karachi put Islamabad against the wall before the chase had truly begun with the wickets of Phil Salt and Shadab Khan. But Hales' approach to Aamer Yamin's first - and, inevitably, only - over produced the first incipient signs that a remarkable chase was on. Aided by a no-ball, almost inevitably, Hales would go on to produce the most expensive over in the history of the PSL. Five fours and a six would help Islamabad get 29 off it, and suddenly, the asking rate was in control, and much of the Powerplay still remained.

The opener was off and away, and played with the sort of abandon that fetched him such success in the Big Bash League, racing along to 46 off 21 before Waqas Maqsood finally got rid of him. But it wasn't before he'd helped Islamabad plunder 77 off the Powerplay; Karachi, by comparison, had managed just 33. What might have been a rout would end up as a sensationally dramatic victory, and Hales was at its heart.

Miss of the day

Sharjeel had struggled for any rhythm until Shadab brought himself in for his second over. He might have been unlucky that Sharjeel's first swipe off him didn't end up down long-on's throat, but that was just the beginning of a contest that was less match, more fever dream for the Islamabad captain. He would follow that up with three abysmal balls that Sharjeel would put away for sixes much more decisively. Shadab lost any confidence he might have had after that, never to even consider bringing himself back on for another over even as the pacers offered full tosses and free hits like they were going out of fashion.

When he came out to bat, he was beaten all ends up by an Amir inswinger at pace - his bat was nowhere near - and sent on his way for a golden duck. It was just the second time the allrounder has been dismissed off his first delivery, and he'd sent down his most expensive spell on the same day. His side might have sneaked home, but the memories from the day are more likely bitter than sweet for the Islamabad captain.

After an explosive start to his PSL career in the first game where Mohammad Waseem took three wickets, the 19-year-old backed it up with an equally stellar second outing. There might not be anything in the wickets column, but forced to come on and bowl his final two overs when Sharjeel was at his destructive best, Wasim allowed just six runs off his last over. The two overs either side of his, bowled by Faheem and Hasan Ali, leaked 17 and 13 respectively. In that context, four overs for 30 runs seems little less than heroic. Islamabad have some superstars in their line-up, but this emerging player truly appears to be living up to the name.