Ruturaj Gaikwad won hearts after scoring a double century, handed over his player of the match award to Rajvardhan Hangargekar

Ruturaj Gaikwad won hearts: The quarter-final match of Vijay Hazare Trophy 2022 between Maharashtra and Uttar Pradesh (MAH vs UP) was played at the Narendra Modi Stadium. Maharashtra won the match by 58 runs on the basis of Ruturaj Gaikwad's unbeaten innings of 220 runs.

At the same time, Gaikwad was awarded the Player of the Match for his double century, but during this time he showed generosity and won hearts. Rituraj, not himself but this player, deserved the real of the match award for his brilliant performance. Let's know about that player….

If any player is being discussed in India today, it is Ruturaj Gaikwad, who plays for Maharashtra in the Vijay Hazare Trophy. Who played a stormy inning of 220 runs in the quarter-final match, his innings saw 16 sixes and 10 fours. After winning the match by 58 runs, he was adjudged the Man of the Match award, but during this time Rajvardhan Hangargekar, who took 5 wickets, was called the rightful owner. 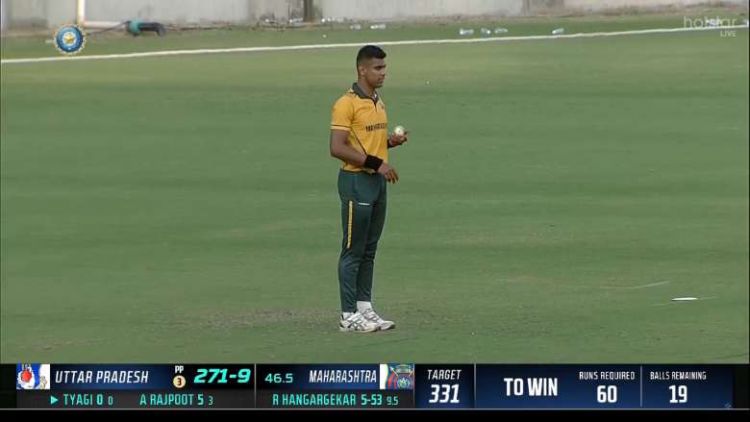 Rajvardhan Hangergekar took 5 wickets: After batting first in the quarter-finals of the Vijay Hazare Trophy, he showed his mettle in the bowling. Bowlers of Maharashtra kept the batsmen of Uttar Pradesh completely tied while bowling brilliantly. They were not given a chance to bat openly.

On the other hand, Rajvardhan Hangargekar proved to be the most successful bowler in this match, taking 5 important wickets for 53 runs in 10 overs. He broke the back of Uttar Pradesh by taking five wickets in his spell of 10 overs.

Ind vs NZ 3rd T20 Pitch Report, Will spinners shine in Ahmedabad too?