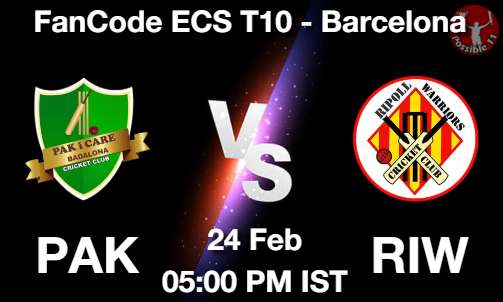 In last 2 matches played on this ground are won by the batting team first. So both the teams will look to defend the targets and expect this to be a high-scoring game.

There is a slight chance of rain. The temperature will be hovering around 9 to 14 degrees Celsius and humidity levels are very high at 81 percent.

The 63rd match of the ECS T10, 2021 will be played between Pakcelona and Ripoll Warriors on 24th February at Montjuic Olympic Ground, Barcelona.

Mohsin Ali has scored the most runs in this tournament for Ripoll Warriors with a very good strike rate of 220 and also he is the opening batsman so he will face most of the deliveries if he stays in the crease.

Shahzad Khan scored 96 runs in 4 matches with the highest score of 44 and with a good strike of 169. He is the best batsman for Pakcelona till now.

Muhammad Amir Raza scored 84 runs from 4 matches with a strike rate of 168 and also he has taken 3 wickets with an economy of less than 6.

Aamir Shahzad is the leading wicket-taker for Ripoll Warriors with 6 wickets at an economy of less than 8 and also he can tonk the ball at the back end of the innings.

Prince Dhiman is a very good player for Ripoll warriors. He scored 74 runs with the highest of 58 not out and also has taken 3 wickets.