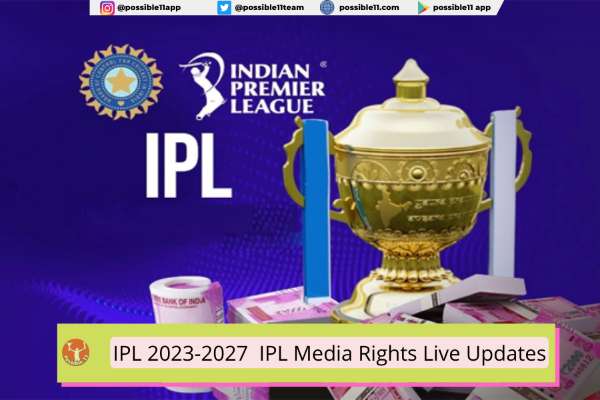 The media rights for the next five seasons of IPL will be auctioned today. At present, it is Rights Star Network are near. Viacom18 JV (Giant Venture), current rights holder Walt Disney (Star), Zee, and Sony are the four contenders for the package whose TV And the digital market are in the race. Reliance Industries Limiteds Viacom18 is being considered one of the strong contenders for both TV and digital rights. Earlier, Amazons name was also involved in the race but it was out of the race without giving any reason. Gone. E-Auction will be held for two days for 74 matches of every season. The auction will be held for a period of five years from 2023 to 2027. In which the number of matches can also be increased to 94 in the last two years.

Today is a big day for Indian cricket and BCCI. Today there will be an E-Auction for the media rights of IPL. This auction can start at 11 am. First, there will be an auction for Package A and Package B, for which Sony Network, Disney Hotstar, and Reliance Viacom 18 will be auctioned.There will be a fight in the middle. ZEE can also stake its claim for Package A. Google and Amazon have already withdrawn their names.

Base Price for each package

According to the four packages, the price of each match is different.

What are packages A and B related to IPL media rights?

Americas National Football League is currently the most expensive league in the world. The price per match in this league is Rs 133 crore. after that the otherAt number one is the English Premier League, where the price per match is Rs 81 crore. Major League Baseball is at number three. Whereas IPL is the worlds largestIt is at number four in the list of expensive leagues, in which the price per match was Rs 54 crore at present. But it is estimated that now it is the most expensiveIn the case of the league, the English Premier League can reach the second number. According to BCCI Treasurer Arun Dhumal, IPL is new this time. Can set records.

“We are confident IPL Media Rights tender will set a new benchmark for the sports industry. Don’t want to predict any number. But the BCCI is confident that it will be a record-breaking number,” BCCI Treasurer Arun Dhumal was quoted by InsideSport.

How will IPL media rights be auctioned?

One interesting thing about this IPL media rights auction

On the appeal of the auctioneers, the BCCI has approved incremental bids of more than 50 lakhs. One interesting thing about this auction is No one is aware of who is bidding in this e-auction. If the price comes on the screen, then it would be known that so much Bid has been placed.

Google out of bidding war

7 parties clear technical bids From what is being reported so far, Google or YouTube has pulled out of the race to get the IPL Media rights. One of the major reasons that has been cited is the estimated 25-28% drop in the IPL 2022 ratings. Disney Star, Reliance Viacom18, Sony Network, Zee Entertainment, Times Internet (Digital Rights), Reliance Jio (Digital Rights) and SuperSport (International Right) are the parties that have reportedly cleared the technical bids. Among these, Zee Entertainment is unlikely to bid as their partner Sony Network is already part of the bidding tussle.