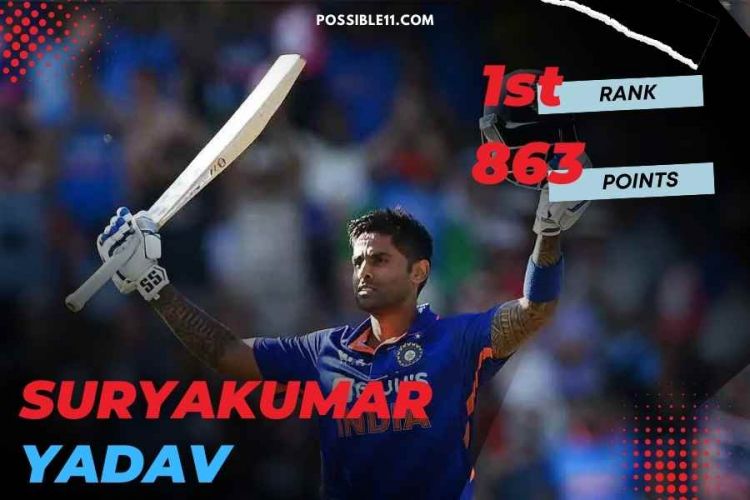 Suryakumar Yadav has risen to the top of the ICC T20I rankings, just days after scoring 68 against South Africa in the ongoing T20I rankings. In Indias second match of the tournament, he also scored a half-century against the Netherlands.

Suryakumar Yadav, arguably the best T20 batter in the world right now, has taken the top spot in the ICC T20I batter rankings, which were released on Wednesday. Surya has been one of the most consistent batters in Australias ongoing T20 World Cup 2022. Surya has so far in the tournament recorded scores of 15, 51*, and 68.

Yadav has surpassed Pakistan veteran Mohammad Rizwan following an impressive start to the ICC Mens T20 World Cup, where the 32-year-old has scored back-to-back half centuries against the Netherlands and South Africa.

The India dynamo has been a revelation since making his international T20I debut in March last year, and his latest feat to dethrone Rizwan is a reward for his excellent recent run of form.

Yadav has already scored eight half-centuries and one brilliant century in T20Is this year, and his two most recent knocks in Australia suggest that the attacking right-hander has more to offer.

The India No.4 has scored 134 runs in three innings so far in Australia, and his stylish 68 against the Proteas on Sunday was a clear highlight.

Yadav isnt the only batter on the rise after a strong start to the T20 World Cup, with South Africas Rilee Rossouw and New Zealand dasher Glenn Phillips also making notable moves inside the top 10.

Rossouw scored a magnificent century against Bangladesh in Sydney, propelling him to eighth overall in the latest T20I batter rankings.

Phillips, who also scored 104 against Sri Lanka at the SCG, moves up five spots to seventh on the latest batters list, with teammate Devon Conway (third) the only New Zealander ahead of him.