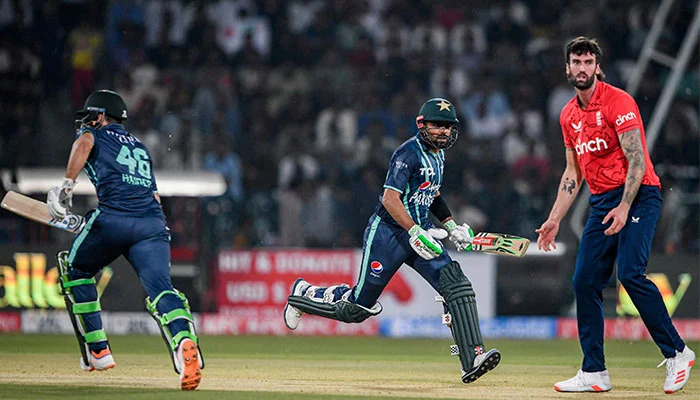 On Sunday, 02 October, the deciding match between the two legendary cricket teams in the seventh and final T20 match of the ongoing seven-match series between Pakistan and England will be played at 08:00 Indian time. Meanwhile, scroll down for your Dream11 Fantasy Playing 11 team prediction tips ahead of the PAK vs ENG 7th T20 face-off.

In the sixth T20 match, England made a spectacular comeback in the team after defeating Pakistan team by 8 wickets to level the series 3-3. Batting first, due to Babar Azams unbeaten innings of 87 runs in the Pakistan team, chasing the target at the loss of 6 wickets, England team managed to reach the target due to the unbeaten innings of 88 runs by Philip Salt and Won the match by 8 wickets.

With this, the series has reached a very exciting turn. Both the teams, performing brilliantly in this deciding match, will enter the field with the intention of winning this match and winning the T20 series.

Pakistan batting unit failed to capitalize in absence of Rizwan as they could not score a defendable total. Babar Azam had completed a half-century to aid his team to a decent total. Mohammad Rizwan and Babar Azam will probably open the inning. Shan Masood will bat at the one-down position. Haider Ali and Iftikhar-Ahmed will handle the middle-order batting. Babar Azam will lead Pakistan as a Captain. Mohammad Rizwan will do the Wicket-Keeping for Pakistan. Mohammad Nawaz and Iftikhar-Ahmed will take care of the spin bowling of his team. Haris Rauf and Shahnawaz Dhani will lead the pace attack of his team.

England leveled the seven-match series on Friday after winning the sixth T20 comprehensively by 8 wickets to keep the series alive. Englands epic chase included the blistering batting by Phil Salt at the top who scored 88 off 41 balls along with Alex Hales 27 off 12 balls. Alex Hales and Philip Salt will probably open the inning.Philip Salt was the highest fantasy points, gainer, in the previous match. Dawid Malan will bat at the one-down position. Ben Duckett and Harry Brook will handle the middle-order batting. Moeen Ali will lead England as a Captain. He is also a good Allrounder. Philip Salt will do the Wicket-Keeping for England. He was the highest fantasy points, gainer, in the previous match. Moeen Ali and Adil Rashid will take care of the spin bowling of his team. David Willey and Reece Topley will lead the pace attack of his team.

Philip Salt - In the last match, he played brilliant innings of 88 runs for the England team to win the match. In this match too, the team will expect a lot from him.

Mohammed Rizwan - So far in this series, he has scored 315 runs in 5 matches while batting brilliantly, it seems to be in a very good rhythm, he was rested in the last match, in this match also the Pakistan team is expecting a good start from him.

Mark Wood From the side of the England team, so far in this series, he has taken 6 wickets in 2 matches, in this match also he can present a good challenge to the Pakistan team with his bowling.

Mohammad Nawaz - He has so far taken 5 wickets in 6 matches in this series, in this match also he can put the batsmen of England team in trouble with his bowling.

This pitch is friendly to the batsmen, although the bowlers get a lot of help on this pitch in the beginning but still winning the toss and batting first will be the right decision on this pitch. Batting in the first innings has looked a bit easier, here the average score of the first innings is 155 runs. The batting in the second innings looked a bit difficult. Thats why 40 percent of the matches have been won while chasing the target.

The weather conditions are expected to be good for the game of cricket for the 7th T20I between Pakistan and England. However, dew is expected to play a big role in the match. There is no chance of rain and fans will be able to watch the entire game. The temperature in Lahore is likely to hover around 24 degree Celsius at 70%.