PAK vs ENG Dream11 Prediction, Playing 11, today Pakistan vs England match Updates The second match of the seven-match T20 series between Pakistan and England (PAK vs ENG) will be played at the National Stadiu

The second match of the seven-match T20 series between Pakistan and England (PAK vs ENG) will be played on 22 September. The match between the two teams will be played at the National Stadium, Karachi.

England defeated Pakistan by 6 wickets in the first T20 to take a 1-0 lead in the series. In the second match, England will look to extend their lead to 2-0, while the Pakistan team would like to make a comeback.

England has very good form in recent matches, most probably they will win this match.

Phil Salt is the second highest run-scorer in The Hundred tournament, he has scored 353 runs in 10 matches, and he can also score big in this series.

Sam Curran is coming up with a very good performance this year, he also performed brilliantly in the T20 Blast tournament, taking 11 wickets and scoring 236 runs, in this match, England will be a good option for the team.

Haris Rauf In the Asia Cup, the teams bowled brilliantly, taking 8 wickets in 6 matches, in this match also England can present a good challenge to the team.

David Malan has shown tremendous batting performance in the recent The Hundred tournament. He has scored 1410 runs in T20 format at an average of 39, in this match, he will remain the leading batsman for the England team.

Moeen Ali In the absence of Jos Buttler, he will be seen leading the England team.

Mohammed Rizwan is the highest run-scorer in the Asia Cup tournament from the Pakistan team, he scored 281 runs in 6 matches, in this match also he will be the first choice of the people from the wicket-keeper section.

Naseem Shah young bowler of the Pakistan team impressed a lot with his performance in the Asia Cup, he took 7 wickets in 5 matches while bowling brilliantly, and in this series, he will have a golden opportunity to prove his talent.

Babar Azam Technically is the best batsman for the Pakistan team, he could not perform well in the Asia Cup but he has scored 2754 runs in 81 T20 matches, and in this series, he has a golden opportunity to get back his lost form.

Shadab Khan is the leading bowling all-rounder of the Pakistan team, he has performed very well with both bat and ball in the Asia Cup, so far in T20 career he has taken 81 wickets in 69 matches and has also scored 329 runs. In this match, he can score good points with both bat and ball, so it is necessary for him to be in the dream team.


England and Pakistan have faced each other in 22 matches in T20. Out of these 22 games, England has won 15 whereas Pakistan has come out victorious on 6 occasions. 1 match ended without a result.

PAK vs ENG: After winning the toss in Karachi, both the teams can decide to bowl first, as the effect of dew can be seen. The team playing first will have to keep an eye on the score above 180.

The weather will be clean and there are no chances of rain at all to interrupt the game proceedings. 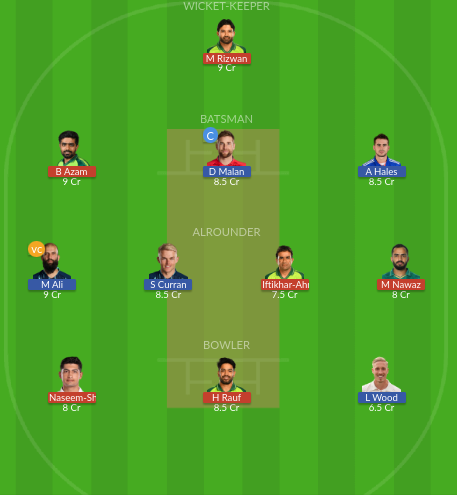