The 24th match of CPL 2022 is going to be played between Barbados Royals and St Kitts Nevis & Patriots (BR vs SKN). The match between the two teams will be played in Guyana on September 21.

Barbados Royals have played 8 matches so far in CPL 2022, in which they have won 7 matches and lost one match. They are currently at the top of the points table. On the other hand, St Kitts Nevis & Patriots have won two out of 8 matches, they have lost 4 matches and two matches have been inconclusive for them. Their position in the points table is very bad.

Barbados Royals look in good form in recent matches, They are the favorites to win the match

Dream11 Fantasy Suggestions for CPL 2022 Match Between BR vs SKN

BR vs SKN: A good batting track awaits at Providence Stadium, Guyana with assistance available for the pacers as well. The pacers have plenty of swings and bounce off the surface to keep the batters guessing. They’ll try to wait it out in the middle overs before going big in the middle overs. After winning the toss, both teams will look to chase, with 150-160 being a good score at the venue.

The temperature is forecasted to scattered thunderstorms around 27°C on the match-day with 90% humidity and 10 km/hr wind speed. There are 49% chances of precipitation during the game. 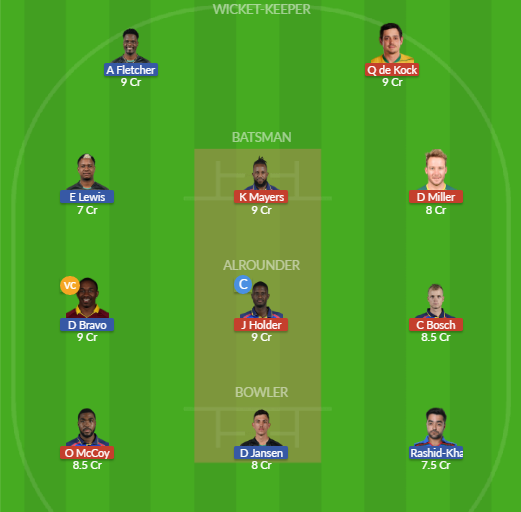