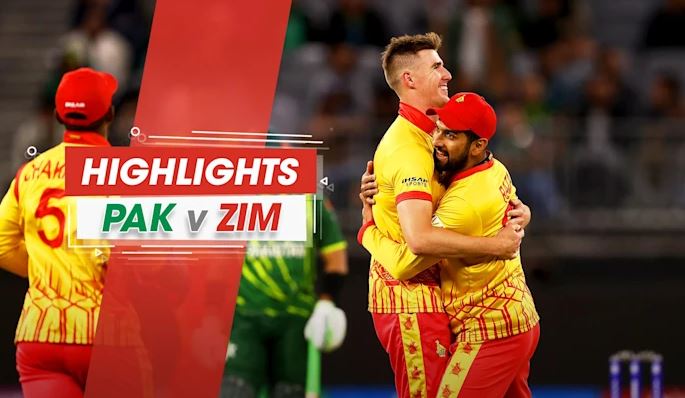 T20 World Cup, Pakistan vs Zimbabwe, Super 12, Group 2 Highlights: Zimbabwe shocked Pakistan by winning by one run in a Group 2 match on Thursday. Pakistan faltered while chasing a target of 131, as none of their batters, with the exception of Shan Masood (44), could score more than 22. Pakistan finished with a total of 129/8 in 20 overs. Masood fought alone as Sikandar Raza (3/25), Brad Evans (2/25), and Blessing Muzarabani (1/18) delivered outstanding performances. Earlier, Mohammad Wasim returned to the team with four wickets, while Shadab Khan took three as Pakistan restricted Zimbabwe to 130 for eight.

Zimbabwe have defeated Pakistan by 1 run. The final ball is struck by Shaheen Shah Afridi, who just manages to complete a single and gets run-out while stealing the double. Its a big defeat for Pakistan as far as the semifinal race is concerned

Won’t call the result an upset, if you watched the match you know Zimbabwe played top cricket from ball #1 and showed how to defend a low total on a batting pitch. Congratulations @ZimCricketv on the win, your passion and hard work shows #PAKvsZIM

Zimbabwes captain, Craig Ervine, describes the victory as "unusual." They worked hard to get this far. Says they felt 20-25 runs short at the start, but bowled brilliantly and praises Razas performance. Ends by thanking everyone for their help.

Pakistans captain, Babar Azam, says his team should have chased this down but is disappointed because they are not up to the task with the bat. He and Rizwan have responsibility, but they escaped. Theyll need to make good use of the new ball. They express their excitement for the next game.